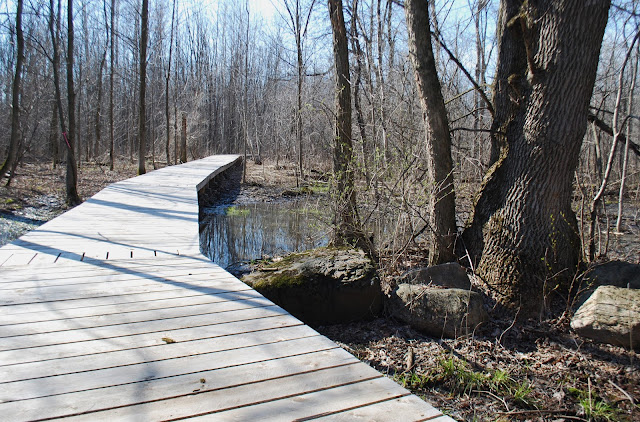 Last April on the 23rd, the city of Boucherville offered its residents a discovery-workshop in a wooded area called "Le Boisé du Tremblay". It's newly inaugurated trail has been accessible by the public since last Fall of 2016. I had the pleasure to participate in this event with my family and together we walked the 1,43 km of trail, starting by a gravel path and expanding into a raised wooded footbridge. It's necessary since this place is mostly a humid environment (humid environments are classified in 4 categories: bogs, marshes, ponds and swamps).

The importance of the Boisé du Tremblay is quite particular: It is one of the main sites where the Western Chorus Frog, Pseudacris triseriata - a species classifed Vulnerable in Quebec and Threatened in Canada - can be still be found.

This tiny beauty is unfortunately confronted with a lot of adversity.

First off, this frog can reach at best a size of  3,7 cm, making it one of the smallest amphibians. Its size makes it hard for it to travel far, reducing its habitat to a radius of about 300 meters around its pond. Such a small habitat to live in can be fragile and since a frog can only live about a year or two (reproducing only once in its short life), a population of frogs can quickly come to vanish. The goal of this workshop was mainly to inform and bring awareness to people. Here's the manifest from the Canadian government on the subject of the Western Chorus Frog.

There's also the fact that tadpoles need near-perfect condition to mature properly. Since the frog reproduce in temporary swamps, they need a good amount of water (no water, no tadpoles, too much water or permanent swamps and the risk of predators like fish climbs up) and they need that water for a period of 80 to 120 days (althought research on that aspect are still ongoing and vary in findings) - enough for the tadpoles to become frogs themselves.
While we visited the place, we could hear the western chorus frog sing its song. We were smack in the period of reproduction and normally, the Boisé du Tremblay is closed to make sure the frogs are not disturbed too much (written in french on the next picture is a warning sign stating the Boisé is closed between April the 10th through May the 8th for the reason stated above). Our small group had the privilege to be guided by experts from Boucherville and the owner of the land, Nature-Action. All of them had lots of information to relay to us, not only about the frog but about the Boisé in general. Here's the owners' website; sorry, it seems it's only in French: Nature-Action.

It's a good idea to review the rules of the Boisé. After all, these rules have been put in place to reduce to a maximum the disturbance humans can cause to this protected area. So beside the time in the year mentionned above where the path is closed to visitors to help the reproduction of the frog, starting on the 1st of June 2017, dogs will be forbidden from entering. Of course any kind of vehicule is strickly forbidden, summer or winter. It's necessary for visitors to stay in the designated pathways and althought this rule seems implicit, I think it's a good idea to state it clearly. Of course garbage, fires and other kinds of disturbances that could threaten the place  should be prohibited. After all, this place should be protected!
Beside the time when the path is closed (between the 10th of April and the 8th of May), the place should definitely be visited! Since I went there at the end of April, I'll definitely have to go back... to take greener pictures! 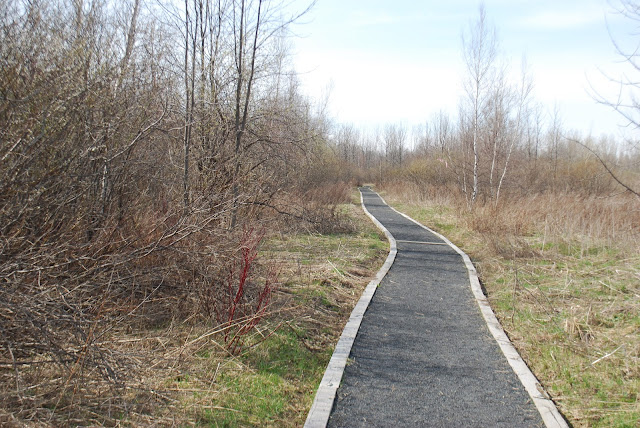