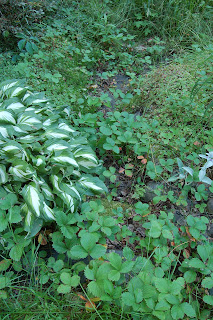 In the Quebec Province, this marvelous berry is linked intimately with the end of classes, the beginning of summer and St-John-the-Baptist Day, our national Holiday. Therefore, it evoques pleasure and joy ! We gave it some room in our gardens.

But instead of putting them in a raised bed or planting them in rows, in a traditional manner, we let the plants run everywhere, acting as an attractive ground cover.

Cultivated strawberry plants are 6 to 12 inches high (15-30cm). They help to keep the soil moist, but don't form into a carpet thick enough to choke all weeds. Therefore, it's necessary reto weed occasionally and/or to spread a mulch between the plants, taking care not to bury the plants' crown, otherwise they could die (the crown is the place where the root system and the stems join together). Strawberry plants can reproduce by seeds (a strawberry forgotten on the ground will leave its seeds on the spot). In that case, the resulting plant will be genetically different from its' mother-plant. This is the way of propagating used by producers when they want to create new varieties. But strawberry plants reproduce mainly by sending runners (long stems "running" as much as a few feet from the mother-plant, and then producing a bud of new leaves that will take root in place). These new plants are genetically identical to the mother-plant.

Louise :
During the years when I couldn't take care of my vegetable garden anymore, my strawberries left their designated spot to run in every direction, unchecked. Even the competing weeds, also unchecked, didn't deter them. After a few years, they came back to a wilder form, their fruits transforming to a smaller, tastier form.  I use dead leaves to mulch my plants, nowadays, but I wait until after the fructification before applying a new layer of leaves, to avoid attracting slugs and giving them a nice, moisty spring home, because they would then feast on the juicy berries.

The strawberry plants established in the area of my former vegetable garden are a one season variety (they give all their fruits at once during a few weeks at the end of June).  They are happy to live among middle size and tall perennials or biennals, such as hostas or matricarias. In one of my perennial beds, they cohabit harmoniously with forget-me-nots (biennals giving lovely little blue-sky flowers in May and June, then usually dying and blackening in the process, leaving behind a profusion of small, black seeds). So, by Mid-June, I pull out the majority of Forget-me-not, giving more room and sun to the strawberries, at the moment in the season when they are ready to rippen their berries. I leave only the one-year-old Forget-me-nots, the very ones that will grow on and produce flowers next year.


Strawberries love sunshine, but they don't necessarily need 8 hours of full sun to be happy and produce berries. Sure, they won't produce as much as their counterparts in a producer's fields, but on the other hand, I don't have to take care of them or to give away some space for them, because they don't need a place of their own. I leave them be and when a plant is in the way, I simply pull it out or transplant it elsewhere (after the harvest, preferably).

Here's a part of this year's harvest, in pictures :

It sums up to around 7 litres of this red abundance ; the years before were similar in yield. When we think about it, it's still a pretty neat save on the grocery bill!


I did no tilling (or plowing which is apparently not so good for a healthy soil, but we'll get back to this topic elsewhere), and no fertilizing whatsoever, if we except the decomposing mulch. I just had to weed and harvest. And of course, I didn't use any pesticide (chemical or natural). Not bad for my initial investment : half a dozen of strawberry plants bought about 18 years ago and left on their own ever since.
﻿

This year, I decided to expand my production and bought 12 plants of a "four seasons" variety, which will produce less berries at the same time, but will go on producing all summer long. I put 4 of them in hanged planters, to see how they will adapt, since it's a variety supposedly well suited to this kind of use. I put the 8 others in the ground, on the border of the house to facilitate harvest (another permaculture principle), and I intend to let them run, acting as ground cover just like my older plants. I didn't show you a map of my terrain yet, but to give you an idea, these new plants will border the house while the older plants are far in the backyard, so chances of cross-pollination are almost zero.  That's good, because I'd really like to keep each with their unique attributes!

Helene : For my part, the strawberries sitting in full afternoon sun do not perform as well as the ones protected from harsh afternoon sunrays. Their berries tend to rippen only on the exposed size, and they don't look as soft, as juicy and their seeds are darker.

Another thing, cocoa shells mulch don't seem to be a good choice with strawberries : I put some under a plant and the berries that came in contact with the mulch rot on the spot.

But my crop is abondant. I started harvesting on June 12th and, like Louise, I can harvest every other day.

With a slice of angel cake and vanilla ice cream, our strawberries are delicious !
Publié par Dames 3Jardins à 19:49