﻿
Louise :
My turn to talk about what happened in the garden this season, a season that's been really bountiful, as you'll see. But I'll start with the failures. You see, first of all, I want to highlight a simple truth : in gardening, nothing is garantied. I must also confess another motivation : I want to get rid of the bad things first! (Note : This exemplary discipline comes from my family who, with no originality whatsoever, thought me to eat the main course before dessert.)

So, here we are... This failure list, I can sum it up like this :  the root vegetables (carrots, turnips, radishes and onions) and the brassicas (cabbage, cauliflower, brocoli).
Root vegetables that stayed obstinately slim :

I don't know if my radishes, turnips, carrots and onions teamed together against me, but this had all the air of mutiny : everyone made lots of leaves, but the root stayed thread-like. Weird, since I sowed them all in different corners of the garden, corners that had different conditions, and I haven't been sparse on the amount of seeds scattered. So this comes as a surprise. I did manage to harvest 2 or 3 dozens of minuscule carrots, about 6 radishes, not one turnip that was worth it, and only about thirty or so shallots. Only my sweedish turnips, planted in containers in small quantities gave a reward of any kind.

On the squash side: I only harvested one Butternut and one Buttercup. Not one zucchini! I wanted to try to dry slices of this vegetable, but alas!

Cabbages became the salad bar of the insects :
I know here why I haven't been successful. I didn't protect any plant with a veil on it. Everything was well until mid-July, at the time I went on vacation. Maybe the insects were poised for my departure, because when I got back I found out some of my plants were eaten up to the trunk. My fault entirely, since a friend told me to protect the plants with a piece of netting, a caution I did not give heed to. Well, I came (back from vacation), I saw (the disaster) and they (the insects) vanquished. Julius Caesar would have been ashamed of me.

For the rest, there were half-successes : for example,  I got about 20 cucumbers, half a dozen or so peppers and bell peppers and some eggplants. And there were great harvests : for instance, a nice variety of culinary herbs including a couple of new things for me.

﻿
And now, let's talk about the fun stuff... Tada! The real successes of the season by importance.

- Number 1: tomatoes ! Not really original surely, but how delicious! I got 6 plants in containers and 6 others directly in the ground. For these ones, I used a plantation method that allow them to crawl on the ground, shoot more roots and multiply their heads (in short, I don't stake the plants et I don't remove any sucker. I had almost exclusively only cherry tomatoes, a yellow-pear variety and red "Christmas Grapes" variety. There was also 4 plants of tomatoes "Millefleurs" variety (L. Esculentum, a different species of tomatoes, from Solana Seeds), that can easily reach 6 feets high and makes gigantic clusters that can each produce 150 cherry size tomatoes. I could have left them crawling on the ground like the others, but this being my first year with them, I wanted to familiarize myself with their temperament first.

Why no normal-sized tomatoes? My strategy follows this line of thought : Since I knew I would be beyond busy at work from the end of August till the end of November, I reasoned that cherry tomatoes would take me less time to prepare for conservation. At this size, all I had to do was make sure they were clean, and put thewhole  in a freezer bag ! No muss, no fuss. Perfect for me.

I harvested1258 ripe tomatoes (I'm also enough of a maniac to count them) including about a dozen normal-sized tomatoes, from a plant given to me by a friend. We ate them, gave them, preserved them and made red fruit ketchup with them.
And then, there was also the green tomatoes : 1570 ! 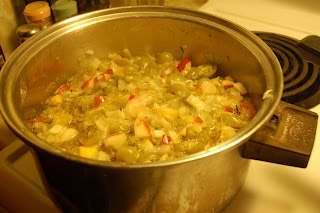 It was out of the question to waste them ! It took more work to prepare them, however, since I had to slice them in 2 or 4 for the recipes I was planning. I did freeze some for later use, but mainly, I made a lot of green ketchup... And I made astoundingly delicious green tomatoe cakes.

- Number 2 : Fruits ! Here they are approximately in the order they graced our table.

﻿
﻿
- Grouncherries : 11,5 liters of fruits, almost all eaten raw (I put one jar in the freezer). In addition, I still have about 2 to 3 liters of still-green fruits. Some will ripen, others won't and will end up in the compost heap since green grouncherries are toxic (like green potatoes, a cousin).

I also made a lot of wild foraging (pears, apples, grappe, cherries, etc.) as previously discussed in this article. 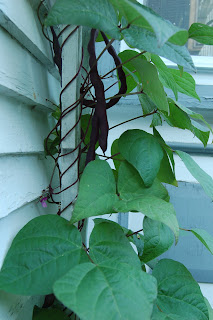 - In third position : beans, lettuce and mushrooms! All in all, 12 plants of climbing beans (9 of them being grown in containers) yielded 598 really long pods, green (Blue Lake) or violet (Purple Peacock - both bought at Solana Seeds again). We ate most of them as soon as they were ripe, either raw or steamed.I froze a tiny bit of this harvest, and I also got 200g of dried beans from pods I left alone to mature and dry on the plant..

﻿﻿
﻿﻿
﻿﻿ ﻿﻿ And the lettuces, 8 heads of Romaine, allowed us to have salad on our table from the 1st of July throughout August. then, at the end of September, I brough back inside seedling and put them under fluorescents, so they gave us a couple of salads a week for almost a month.
﻿


We have enough frozen mushrooms to last us until February if not later. Here's the article on the subject.

My surprises and tryouts for 2011

My first taste of tender daylily leaves was in last April. I also tried Violas leaves at that time. I never thought these were edible and thus was marveled to discover these delicious Spring greens!

And there's the added bonus that they grow aplenty here. In the middle of summer, I also realized I could eat the daylily seeds and buttons.

I tried burdock (bardana) root, but I found its harvest and preparation tedious for the reward. Same for dandelion root, but since we only use a small quantity of the dried root for a cleansing spring herbal tea, taking time for it didn't bother me that much.
I've grown for the firts time quinoa in very small quantities, so this only gave me a tiny amount of seeds. But... it made me aware of what these seeds require in harvesting time, curing and preparation. Since then, I also realized I could have eaten the leaves of the plant (like mustard, by the way). Quinoa also requires to be soaked before cooking to get rid of the saponin with which they are naturally coated. I readily realized that I could then use this water, full of the chemical coumpound, in my home-made insecticide recipe.This is the first cereal I dare grow and since quinoa as a good yield when one knows its intricacies (not yet my case, but I'm learning), this becomes a very interesting cereal for city gardening (in numbers we speak of a kilo of seeds per plant, each plant taking only square 30cm of space - a square foot).
I've also discovered lovage, a tall perennial that can replace celery leaves in culinary use, and horseradish, another perennial that can offer its leaves for our plates - in addition to the root.

Another pleasant discovery (and source of relief) was the fact that we can cook the leaves of turnips, radishes and rutabagas (swede turnips). It's a good thing since my turnips and radishes pretty much only produce that : Leaves! So this was a kind of way for me to "save" these harvests from complete disaster!﻿﻿ ﻿

That's it! Another year full to the rim of beautiful experiences! My garden is 26 years old, but the vegetable patch hasn't been worked for a full 15 years before I started it again this year (excluding a couple of berry varieties). This year, at last, I'm back to fill our plates... and with a vengeance.

All in all, my biggest surprise was to find out I can grow an astounding quantity of food providing a lot of care and effort, but in very little space. My husband as been even more surprised then me and since he does have a hearthy appetite, I'm pretty sure he won't object to an increasing surface of the garden being dedicated to grow edible plants!
Publié par Dames 3Jardins à 18:41