The velvet of the peach 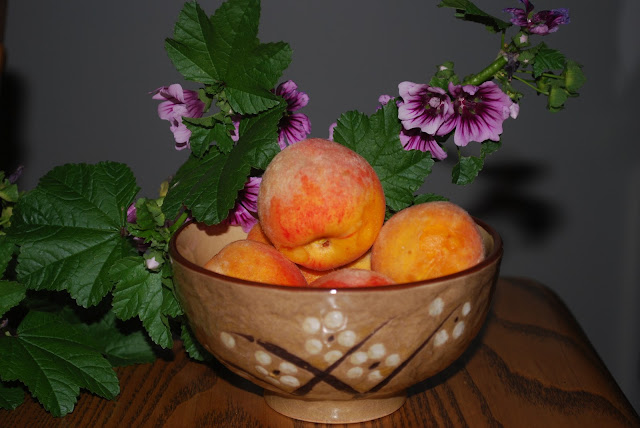 Follow-up for this article here.

Hélène :
Last year, my desperate search for a new fruiting tree of small height (and something different than the too-often-seen apple tree) first stopped on an apricot tree, unfortunately back ordered. I was then introduced to the peach tree Reliance and I was told that - compared to an apricot - it was more resistant and that the fruits were delicious.

What's that? Peaches and apricots in Quebec? How is that even possible? Soon someone will say we can grow bananas here! (Actually, we apparently do have a kind of "northern banana", the paw paw tree, from which the fruit taste between that of a banana and vanilla custard, however, I haven't sampled it myself).

Back to the peaches, I decided to try it out and luck was on my side when the boss himself came to deliver me the tree. His knowledge was invaluable and he approved of the decided spot, mentionning that the 7-8 feet high wood fence would protect it well from harsh weather and it would receive enough sunshine.
Beside these prerequisites, the tree is classified a zone 5 minimum, but I have heard of apricot trees that could go as low as zone 3! (No idea if they do make fruit however). Still, this information makes us rethink what we can and can't grow around here, no?

Last year, when I bought the tree, the fruits were already on the branches. I wasn't sure when I could harvest them exactly, so I waited for them to become a little bit too tender. Quite a mistake considering I'm not exactly the one who harvested them : Hurricane Irene made sure that the next day, they were all on the floor! The resulting fruits were less tasty and their flesh was a bit crumbly (that's the first picture of this article), but the taste was still exquisite, or at least, my son didn't look twice at them before engulfing them!

This year however, I was scared of having none. My juneberry (amelanchier canadensis) made delicious fruits these past 2 years, but this year, the flowers simply disappeared without making fruits. It was due most likely to a night frost, even thought we had agreable temperatures this spring. Luckily, the peach tree's blossoms come a bit later and didn't suffer the same fate.

This year, the first peach was harvested at the end of July and it was still firm at the touch but all traces of green were gone from the velvety skin. The taste was even better than the year before ; refreshing, with a complexity of taste far superior to those one can find at the supermarket. It even had a bit of astringency. I should mention that this peach has a relatively thick skin and the variety makes small fruits. Still, overall, this is the beginning of a beautiful friendship.

Note, if you wish to get a great book on unusual or forgotten fruits for the garden, Lee Reich's book, Uncommon Fruits for Every Garden is a must!﻿ The best part : Mr. Reich lives in New York, so most of his recommandations work here too!
Publié par Dames 3Jardins à 20:02