Hélène :
While this season may wake the poets inside us, what brings me to write this article is a great discovery of mine : It's about broccoli and their strangeness. Everyone knows this vegetable and in my youth, after Popeye's spinach, it may very well have been the second most served vegetable on the table. But have you tried it in the garden?

This year harbored my first experience with it and here's a revelation that may encourage you too to try it in the years to come. Broccoli is actually an hydra. Yes, yes! When the first crown is cut down, smaller ones sprout in the following weeks! I almost missed that, because after collecting the first crowns on my 3 plants, I thought I should just rip the plant out, since to my inexperience, the harvest was over anyway! Luckily, because of my lasiness and a 2 week trip on another continent, the deed wasn't done. I've been taken by surprise when  I spotted the new heads amongst the yellowing  cucumber vines.

Cucumbers? Oh yes! I planted them amongst the broccoli. They hoisted themselves through the broccoli's blue foliage and reached the bamboo poles I had previously stalked here and there. Both of these plants work well together!

Broccoli isn't always an easy vegetable to grow. Louise didn't get any heads, but the leaves are also edible so she feasted on that. On my account, I attempted a little experiment that may be partly responsible for my success. First off, I started the plant inside, from seeds. Then, when  it was time for transplantation, one of my transplantation containers had 2 vigorous plants and I just didn't have the heart to cut one out. But they were definitely too close together. The solution came from Ray Browning (You Tube channel : Praxxus 55712). Here's his method in a nutshell : he transplants his tomatoes maybe 2 or 3 times, each time into a pot that is too deep for them. He places the plants at the bottom of the new pot, pushing the stems apart from each other. While deploying the stems, he adds some new soil up to just under the couple of top leaves left on the plants (he cuts the rest out close to the stem and discards them). This way, he separates them gradually, while he keeps burying them up to the neck while they grow. This makes stronger plants because the plants make new roots on all the lenght of the burried part of the stem. And while doing that, he realized there is no need to take out the weakest plant.

If he could do so for tomato plants, why wouldn't it work on broccoli? I used his technique while transferring them outside in the garden : I deployed the stems to keep the plants apart, I buried the stems with a good mixture of manure and garden soil and to keep all of that in place, I pressed a big rock in the center  between each stem. 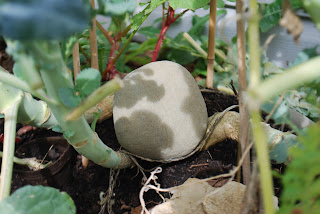 This rock first served a purpose by separating the plants and keeping them away but it provided something else, something by all accounts bigger. (I offer you only my theory here, this single test cannot demonstrate all the benefits of the technique.) One principle that is known in gardening is using the thermal mass of an object (a rock, like in this case, or gravel or even a water point like a pond) to accumulate the day's heat and leaching it back slowly during the night. This produces a more stable temperature in the surroundings of the object used. Of course, broccoli likes cool weather, but I have a feeling that for any plant, whatever its temperature preferences, a very variable temperature like those we had this summer is not all that good.

Speaking of which, we could push the thermal mass principle, an important principle in Permaculture by the way, farther than a rock on a broccoli plant. We could use this knowledge to try to further the tomato season (that was coincidentally shortened this year). A gardener could design his garden by using a cement patio's heat by planting just beside it. Similarly, tender plants near building foundations may resist the colds of winter better. Sepp Holzer uses boulders as thermal mass in his native european mountains to grow all kinds of tender plants where the winters are, in principle, much too harsh for them!

All in all, this experimentation opened my mind on the variety of methods we can actually use in the garden. I can thank my broccoli, because indeed, their high performance brought my attention on my rock's virtues. So maybe this rock hasn't been used to its full potential considering broccoli still prefer cool weather, but this gave me my first practical lesson about thermal masses and I am grateful. This will surely be a knowledge I will use in the years to come! 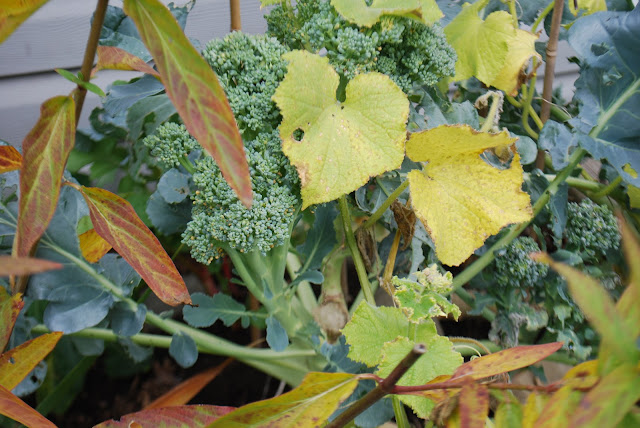