Hélène:
Let's have a follow-up on last year's winter discoveries with 2 new types of harvest in the middle of an unlikely season. Old recipes from Europe mention harvesting rosehips in winter, the idea behind the timing is to soften the fruit with one or multiple freezes (depending on the recipe, some state only one is necessary while others swear it's better to harvest them in January or February). A soft fruit is easier to prepare but beware harvesting them too late when the rosehips loose their vibrant red-orange color and turn black, rendering them inedible. 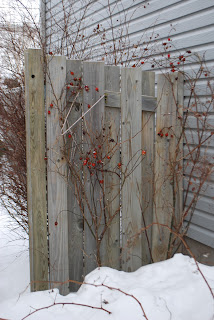 In January 2012, I would have liked to make this harvest, but we had so much rain in November and December (and no freeze), that the fruits became black. Luckily this year, freezes arrived early and thus created good conditions for this kind of harvest. On the 2nd of January 2013, I walked right into the 45cm of snow we had received earlier on December 27th and made the harvest. I must say these flamboyant orange-red orbs are a beauty to behold in the otherwise blinding white landscape. With so much snow, I couldn't reach everyone of them unfortunately. Anyway, considering I lost a mature plant last spring and I close-to butchered a second one (it's also buried to the top in snow),this left me with only one plant to harvest! 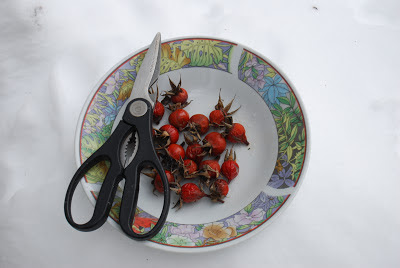 Cute berries but what do you do with it? Harvested in winter, these babies are great for jellies. Some recipes marinate them in a white or red wine before boiling them and passing them through a sieve, others omit the marinade part. I'm taking some as I write in a superb herbal tea : A fruit cut in half (take out the seeds and the hairs), with boiling water makes a delightful pink tea that doesn't taste like perfume but is reminiscent of its origins. I'm betting it would be beautiful in a duo of herbs, possibly combined with dill seeds or raspberry leaves or maybe with a very light touch of spearmint.

If you have an apple rose (Rosa Rugosa, Rosier Rugueux in French), the fruit is so big some people eat it just like that, as long as the seeds and hairs are avoided (the hairs are very iritating - in fact, they are used to make itching powder). This is an aspect of all types of roses producing these fruits. Simply cut the fruit in half and scoop out the seeds and hairs with a spoon.

Louise's sidenote : The rosehips contain an astounding amount of vitamin C, even higher than oranges! Some sources claim that apple and beach roses give bigger fruits but dog roses, wild roses and non hybridized roses give tastier fruits.

First off, the whole thing isn't easy and frankly, I'm not sure my first log made me save money versus the grocery price of the mushrooms themselves. My second might now that I know a bit more what I'm doing... Mushrooms are finicky! I started by buying a shiitake mushroom log. Unfortunately, 3 weeks after I started it, it was rotten, moldy and it was crumbling under my touch. I watered too much surely, but maybe bacterias were already present and never gave a chance for the mushrooms to flourish. Richters have an amazing customer's service and so, they offered me an oyster mushroom replacement (they were out of stock on shiitake). 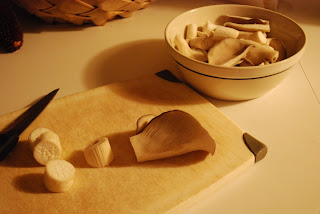 I was more careful about watering but still nothing grew! 3 months after that, at the beginning of September I left the log to it's own device, for a trip of 2 weeks in France. I was so surprised when I came back and the log was fruiting! It's been giving us flushes after flushes until the end of December when I let it rest.
A couple of tips and tricks here : The log itself is in a plastic in which we make incisions in a X pattern, where the mushrooms will sprout (This helps prevent bacterias and other fungus attacking the log since it's still mostly protected in plastic). But there is another plastic that's used to make a tent shape on top of all of this. This plastic is maintained at a certain distance from the surface of the log with skewers to keep humidity high under it. If this plastic was stuck to the log, water would keep there instead of being properly absorbed or evaporated and mold and other problems would happen. And there's the beginning of the great puzzle. You have to figure out the optimal place to insert the skewers so they will keep the plastic tent at bay (but not too much), this tent, when damp from your daily spritzing of water, will have a tendancy to sag or to direct water drops on its edge and ruin the table supporting everything (unless you have a very big tray or cookie plate). When the mushrooms will start to come out of the log, you will also have to reposition your tent so the plastic doesn't come in contact with the fruit, else it will rot. It is a complicated enterprise to say the least.

Add to all this logistic that you do have to spritz the inside of the tent and the log about twice a day (not too much each time), not spray the mushrooms directly and stay present and vigilant all the time (weeks, months, the time it takes for the harvest to be truly over or when the log needs a break it doesn't need water at that time), makes it an adventure not tailored for everyone. Don't forget the worst. If your log happens to rot, it smells really bad! Even when a log is doing fine, there's a definite mushroomy smell (not bad but if you live in a 1 and a half flat, this might make you reconsider the purchase). I also noticed I did have to rotate my log once in a while to encourage fruiting on the other sides too : If some sides are in semi-darkness, they won't fruit there. Of course, a mushroom log doesn't go in full sun either, indirect light or a north facing window should be fine.

The humidity in the tent is very important. If you water too much, you get rot but if you don't water consistently you get mushrooms that dry on the log. Luckily, they are easy to rehydrate but once they have dried, they won't start to grow again : you take them of the log and use them in a meal.
Regardless of everything I previously said, the experience is worth it! It is such a different way of gardening, a way that can happen in winter when I long to be outside in my garden beds. Mushrooms are part of a mysterious and secret world and getting to know them like this makes me feel... alive while everything outside is still and dead.

Louise's sidenote : Mushrooms are not plants per say. Scientists today consider they are not part of the vegetal kingdom, nor algae, because they can't produce chlorophyl or make organic produce like plants do with photosynthesis. The mushroom is the temporary fruit of a fungus from which the permanent part lives underground and is called mycelium. Fungi feed a bit like animals either by consuming dead organic matter, by parasiting a living organism or by forming with another organism a symbiosis that benefit both (we call these last ones mycorhizae). Mushrooms are thus from a different rein, the fungus world. By the way, lichens are part of that rein too (it's a mycorhizal mushroom in symbiosis with an algae). So a mushroom is the fruiting part (edible or not) of a fungus we call superior, by opposition to microscopic mushrooms we call inferior mushrooms : molds, rust, mycosis, mildew, yeast. Scrumptious, isn't it? One thing's clear : we are only glancing the tip of the iceberg when it comes to our knowledge of mushrooms and their essential roles in the ecology of the land.﻿
Publié par Dames 3Jardins à 11:23