About the potential richness and diversity in an edible garden, part 1

Louise :
A few weeks  ago, I answered to an anonymous reader who left us a commentary on a previous article that was talking about my culinary discovery of the moment : daylilies.
This exchange coaxed me to write about growing edible plants in polyculture, according to my own experience. But I don't find the task so easy and, as I want to cover the subject a little more in depth, it will be presented in a series of articles that we will publish in succession.

What is polyculture and why use this method?

Polyculture is a way of designing gardens, garden beds, vegetable patches or even orchards with as much vegetal diversity as possible. In those spaces, if a good number of plants are edible, many others are not. It is because they are there to do other tasks that are equally important. It has been proven  that because it imitates nature, this method builds very resilient ecological systems. Therefore, this idea of implementing as much diversity as possible is one of the basic principles in permaculture.
In opposition to polyculture, there's monoculture, the predominant model in industrial agriculture. A good example of this is the apple orchard, basically containing only apple trees growing through a carpet of grass. We can also think about these gigantic farms in the american Middle-West, producing corn, and rotating it with soy in an effort to keep the nutrients in the soil to a bare minimum. This agricultural model does not try to imitate nature, on the contrary, it constantly wars with it with tools like chemical fertilizers, insecticides, pesticides and heavy machinery.

The residential sector also has its monoculture: lawn. In fact, it is the most important irrigated culture in United-States. In this country, the total surface occupied by lawn is three times greater than the total surface devoted to corn.

The vegetable bed in polyculture :

Take note that the term "polyculture" may also refer to a very specific method of gardening where we spread at random a mixture of many different vegetable seeds on the same garden bed.

We choose vegetables that can be sown early in spring but won't mature all at the same time (radishes, beets, carrots, mustards and different types of lettuce, for instance). While the young shoots make their appearance and develop, we harvest some in the spots that are too crowded and we eat them as greens or baby vegetables. We leave the others in place to continue their growth. We repeat this harvest as long as it is needed, until the distance between the remaining plants is sufficient to let them grow fully.

In opposition to the traditional method, the operation of thinning the rows is not done all at once at the very beginning of the plants' growth, but in succession, only as needed. Furthermore, the young plants that are removed are viewed as an edible crop instead of being discarded as waste. Finally, because the types of plants are varied, they can occupy the space without hindering each other. For example, while a carrot grows underground, its slender leaves find their place in a nook between two lettuces that are spreading over the surface of the ground.

While we proceed with this ponctual harvesting, it is interesting to create a few clearings just big enough to put in it a young transplant of a bigger vegetable that will grow much more slowly: a brocoli or a cabbage are good candidates for this.

I tried this kind of polyculture, two years ago, in a half-shaded young bed between our house and the neighbour's house.  I didn't use all the space, but only three small clearings in which I sowed a mix of vegetables: many kinds of lettuces, carrots, turnips, radishes, beets and small onion bulbs.

Lettuces and turnips were interesting while the rest was somerwhat disapointing, probably because the space where the trials happened just didn't receive enough sun. The carrots and beets stayed small and I'd rather not mention about the radishes. Actually, I haven't yet found the spot in my garden where root vegetables have managed to do well.

Most of us gardeners are already practicing polyculture:

In fact, rare are the gardeners that cultivate only one or two plant species. And the reflex to physically separate our plants is weening. From my stepmom's confession, no one would have mixed annual vegetables with ornementals in the 1940's. Yet, this strategy is particularly useful in our city gardens, because of their small size and unusual conditions. It as become common to see, in a city garden, a rhubarb plant neighbouring a rose plant or tomatoes snuggled between a shed and a spirea hedge.

But the more we try to produce food on our small parcels of land and balcony, the more we need to find ways to maximize the space. Here, polyculture may lend a hand.
Polyculture, an ally for the gardener who cultivates edible plants:

Of course, as in the traditional vegetable garden, we still have to give each plants their required space, sun, water, warmth, soil requirements, etc.

Actually, those annual vegetables we so prize are generally more fragile and finicky than many a perennial ornemental. Their capacity to adapt to different conditions are more limited (if you want a good crop, that is). It is however normal: most of these plants come from sunny and warm countries. Moreover, we do ask more out of them than just growing well and looking pretty. To reach what we want out of them, they went through a tough selection throughout the centuries and have become domesticated.

In my opinion, heirloom varieties have more to offer to the gardener than the recent hybrids that saturate the market. These hybrids have been selected more for their abilities to produce well and be resistent to certain disease in monoculture situation. They need constant irrigation, fertilizers, insecticides and pesticides.
Leave them to themselves however, and they are less able to thrive in a natural environment (one that has, for example, other species of plants to compete with or that  is subjected to the occasionnal dry spell). Some farmers recognized for their work to advance the fields of ecological agriculture and polyculture - like the famous austrian farmer Sepp Holzer - have realized that these vegetable hybrids lose quality in taste and even in nutritional value what they apparently have gained in productivity.
The availability and popularity of different varieties of edible plants has varied widely throughout the years.  For instance, many flowering plants have passed from giving strongly perfumed flowers to cultivars that have pretty flowers but are almost scentless. Phlox is a good example and many varieties of other plants that can now produce double flowers.

On the other hand, many hybrids are sterile or produce babies that aren't like their parents. In vegetables, it's generally not something we favor when we want to gather our own seeds for the next year's sowing. On the other side, some hybrids do have interesting qualities that aren't available in older cultivars, like the tomato "Sub-Arctic", presented on the picture above.

Of course, these plants choice of selection also stem from marketing considerations. Nurseries rather prefer selling annuals instead of perennials since it means a reliable repeat of customers year after year.

At the grocery store, fruits and vegetables have changed a lot in the past decades and althought we do have more choices than before, the taste of those products coming from industrial agriculture is generally inferior to the taste of our garden's produce. This is simply because the produce grown by mass agriculture have been selected first for their appearance, yield and transportability, not their taste.

Remember those Florida strawberry that were pinkish, kind of hard and barely tasted strawberry?
A beautiful and good fruit, well matured on the plant doesn't bring back a dime if it becomes jam through its Florida-Québec trip. Right now, California strawberries supplanted them, and good for us ! But in my humble opinion, none of them beat the taste of our local strawberries - at least when the season is agreable to their good growth.

Louise :
Furthermore the consumer demand favors good-looking fruits, which closes the door to many otherwise good varieties whose sole defect is its looks. Of course, a farmer will select plants accordingly and favor plants of reliable uniformity, color and appearance.

And this often lead to a wasteful attitude that the client himself is rarely even aware himself: the farmer can't sell these defects for human consumption (an important amount of the initial harvest, by the way, sometimes as much as half of it) whether they be ribbed potatoes that are hard to peel or carrots that aren't perfectly straight.

Some of these defects generally end up in the 50 pounds bags tagged for deers and sold to hunters in fall. I've been bold enough to try one of those bag for my own consumption. I ended up with dirty, broken or crooked carrots, some with 2 legs or bigger than standard, but they were delicious. They required more work to clean and peel and there was a certain amount I had to just throw away (something my worms were delighted about). But I payed 11 cents for a pound (24 cents for a kilo)! I did, at one point, get a bag of carrots that had a strong carotene taste. But the very same thing happened to me with a normal bag from the grocery too, so...

The point is, when we make a vegetable garden, we can expect some to have defects: siamese tomatoes, crooked carrots or too small carrots, imperfect skin or irregular color, especially since the seed merchant whose aim is us, gardeners, tend to favor varieties whose first qualities aren't appearance, but taste and originality, for instance.

In our garden, no one will stand between our harvest and our table to discreetly eliminate all those deviant specimens. The new gardener who doesn't know about that may hence feel disapointed when he finds out part of his harvest is so imperfect - especially since we live in a world where perfection is the game, this failure is disheartening, even if it's actually quite normal.

In older times, farmers and gardeners who were producing their own seed stocks weren't spared from these vicissitudes. But with perseverance, they managed to select, year in year out, varieties of vegetables that were very well adapted to their specific local clime.

As gardeners, we too can explore the vast array of choices offered by seed merchants to find fruits and vegetables that do well where we live. Those varieties not only live better in gardens that are appropriate to their needs but they may also deliver better for our needs and taste too. 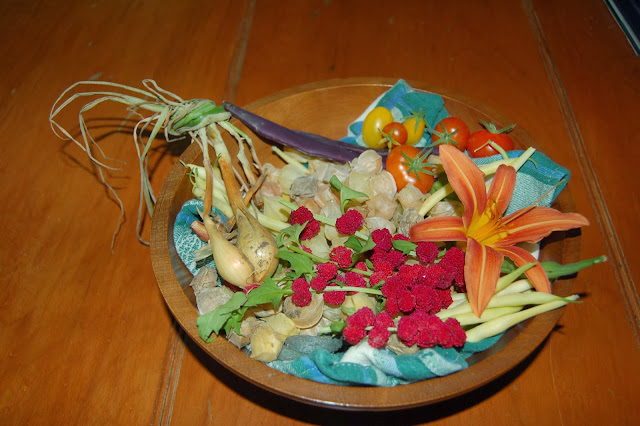