Regarding rhubarb, there's a question of creativity

Hélène:
Too sour for my taste and dipped in sugar, I find it too crunchy. Rhubarb seems limited in its the culinary uses. But after some research and tryouts, here's a couple of ideas that may spark your curiosity.

First of, rhubarb jam is easy to make and delicious to eat, however it requires a long time to cook in order to get all the water out of it. Everything is a question of personal taste, of course, but for most people, it also requires a lot of sugar.

Here's a small tip: When I cook my rhubarb jam, I add water (and sugar of course) and when the pieces of stalk start to fall apart (after about 20 minutes), I separate liquid from pulp with a sieve. The liquid is a beautiful coral or even ruby color (if I add strawberries to the mix). Put back the juice on the stove to bring it to the  consistency of a syrup and you have there a wonderful base for a rhubarb soda. Some will say that taking the water out of the jam this way will take part of its flavor from it as well; Louise finds that the jam actually becomes less astringent, but on my part, I haven't found any noticeable difference. To each his own, I guess.

There's more to do with rhubarb, of course: from a delicious rhubarb cake found in this fabulous book, (in French, still available at Renaud-Bray), to the marvelous  rhubarb and strawberry croustade from the amazing Martine (the recipe is also in her book that I highly recommend! Again in French), there's clearly more to rhubarb than that sugar-coated, cristallized stalk!

Note: The complete recipe for the rhubarb syrup comes from this book (in English this time), a book I have recommended elsewhere on the blog, if I'm not mistaken. Rhubarb syrup can be frozen directly in a bottle and doesn't change volume too much because of it's high ratio of sugar.

A substitute to lemon juice:
I was surprised and happy to learn, some years ago, that rhubarb juice can be used in place of lemon juice in some recipes. Since lemon juice always seems to spoil here at home (I don't use it fast enough), I now freeze my rhubarb juice that would suffer the same fate otherwise. Of course, I could have done the same with lemon juice years ago!
My first batch of rhubarb juice was done by pure chance: Once, I was unfreezing pieces of rhubarb when I noticed a lot of the juice had separated from the stalk pieces. I kept it, freezing half of it right back and trying the rest on a recipe that called for lemon juice. The results being conclusive, I adopted the rhubarb juice as part of my culinary arsenal.

Subsequently, I used a juice extractor. I used small pieces of rhubarb to prevent filaments from getting stuck in the blades, but my extractor now broken, I resorted to the easiest method available.


I use Hélène's rhubarb jam recipe, but with four variations. First, I don't add any sugar. Then, I add just enough water to cover the bottom of my pot. I also cover it during all the cooking time, in order to keep the steam in. Using a sieve to separate it from the pulp, just like Hélène does, I obtain an unsweetened, almost non diluted juice that I don't filter furthermore and that is sufficiently acid to be used as a substitute to lemon juice.

Finally, I sweeten the remaining pulp with some sugar or maple syrup and I put it back on the stove for a few more minutes of cooking. 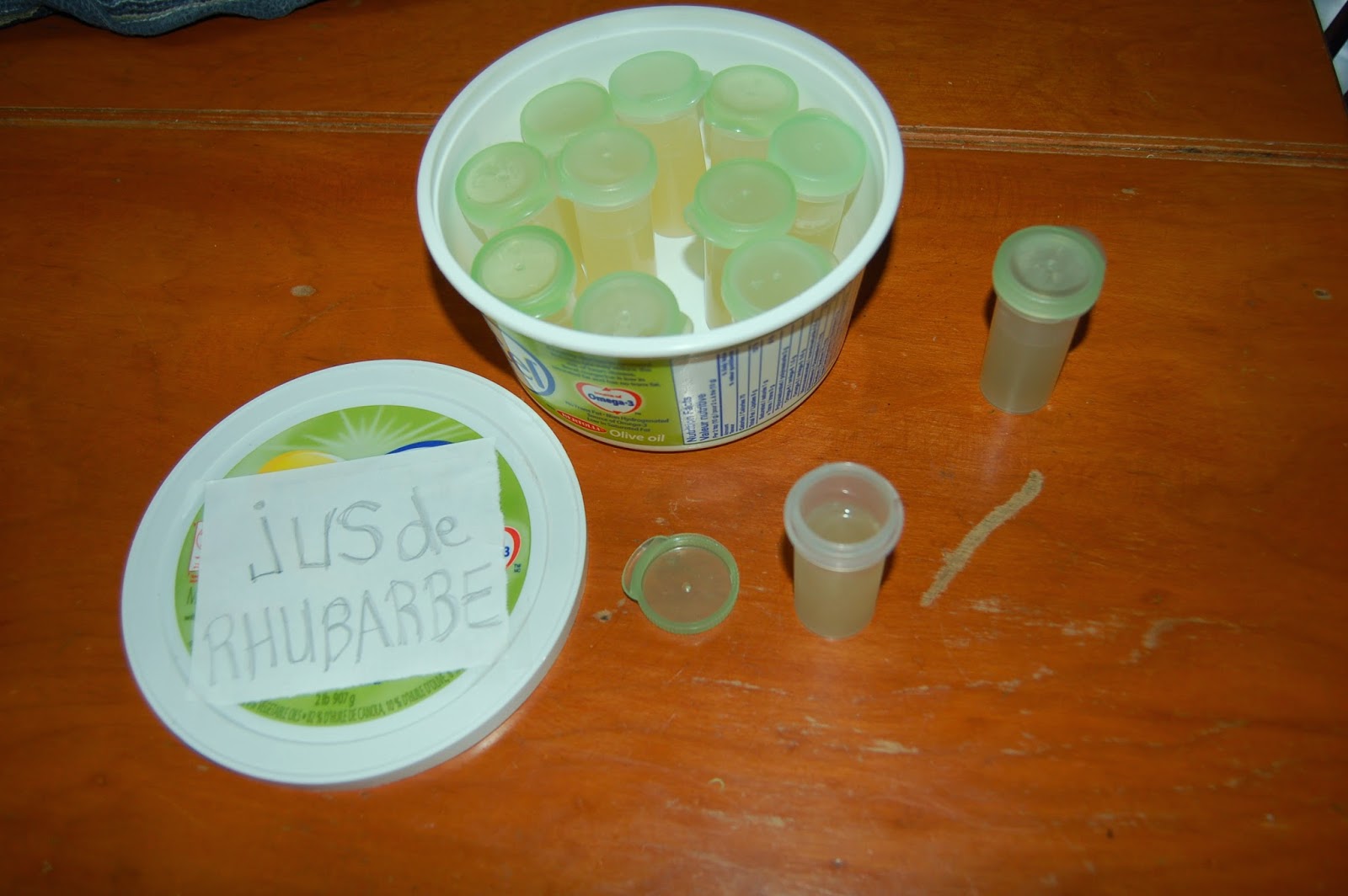 I do freeze my rhubarb juice in small portions of 20 mL (4 teaspoons), making it easier to use. I guess it could be frozen in ice trays, but I reuse small medicine bottles instead. I nput these small bottles in a larger container and voilà! I have a good stock of rhubarb juice ready to use until the following spring.

There's something incredibly gratifying in producing at home something that replaces an "exotic" produce such as lemon. And my rhubarb juice is completely bio, too!

Let's talk about the culture of the plant:

We can harvest the stalks of a two year old plant, if that plant was a cutting from another. The usual wisdom is not to harvest more than two thirds of the stalks, but a second harvest is doable around September.  These plants will be at the top of their game for the next 5 to 10 years. After that, harvest may dwindle but rhubarb plants can still produce at the robust age of 50 years, sometimes even a century according to Wikipedia!

A mature rhubarb plant (around 3 years old) can produce flowering stalks. It is said that older varieties have a stronger tendancy to do this compared to recent varieties.
It's possible to produce plants from seeds, but according to some sources, it's apparently harder under our latitudes. There's plenty of informations on the net for folks who want to try this. Of course, the plants started this way will be too small for a first harvest on the second year.
Since I let my plants flower, I harvest them only after the flowering period to reduce stress on them. Cutting the stalks and leaves (poisonous leaves, so beware) exposes the ground, so I use the humongous leaves as a mulch to protect it. They decompose fast, releasing nutriments such as potash and phosphorus, but they seem to do a good job of smothering weeds, maybe because of their toxicity. I also add compost or manure and I put more mulch in the form of dead leaves from past falls.