October blooms in my garden

If, like me, you're blessed with mature trees surrounding your home, you can enjoy their autumn splendor.

In comparison, the few species of annual and perennial plants still in bloom are somewhat dwarfed by these giants' magnificience, but they're worthy to behold! 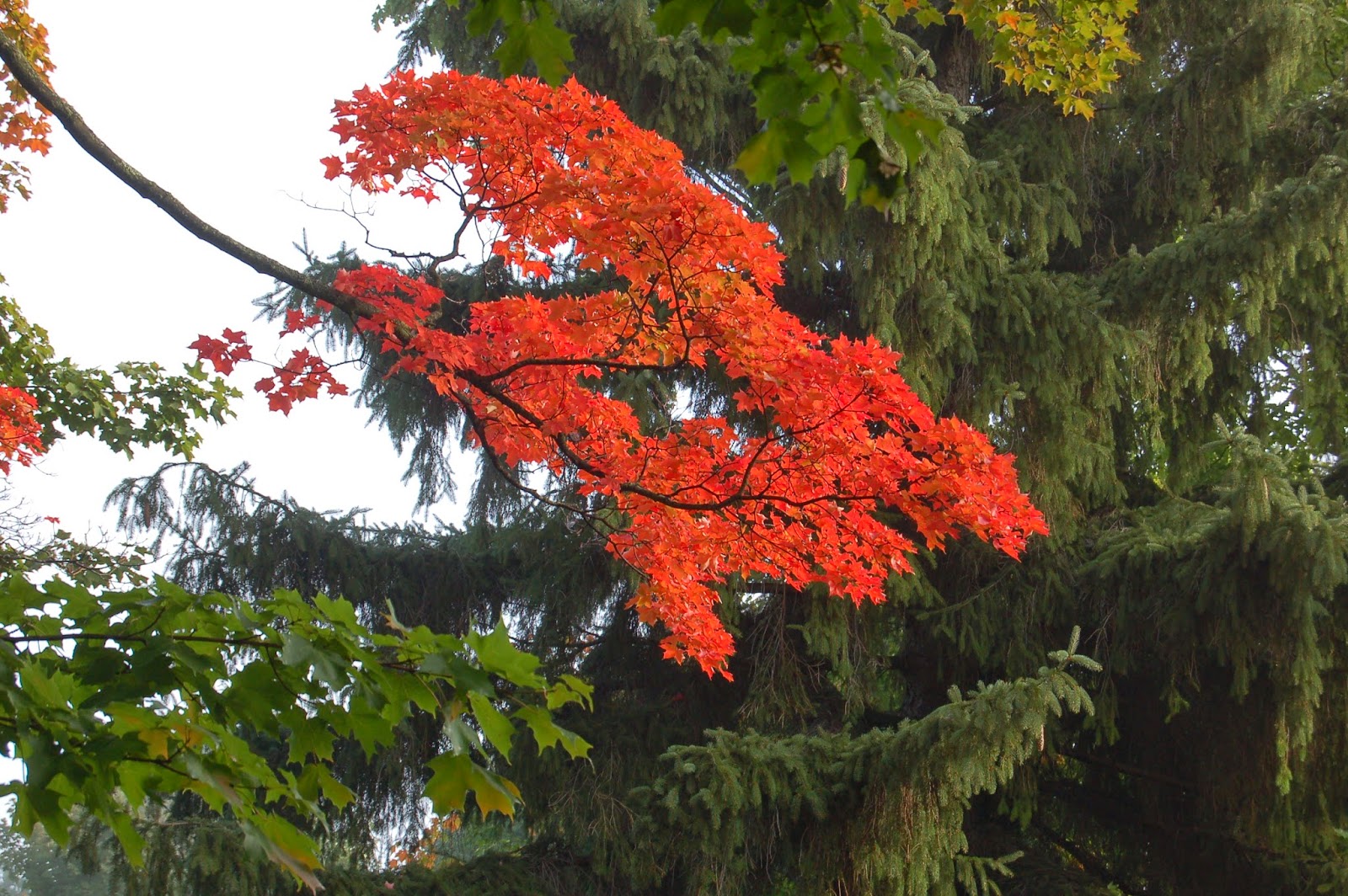 By offering you a quick tour of my garden, I hope to help you discover or simply remember a few interesting choices of plants blooming in fall, in Quebec. And to wrap it up, I even put aside a small surprise in photo. 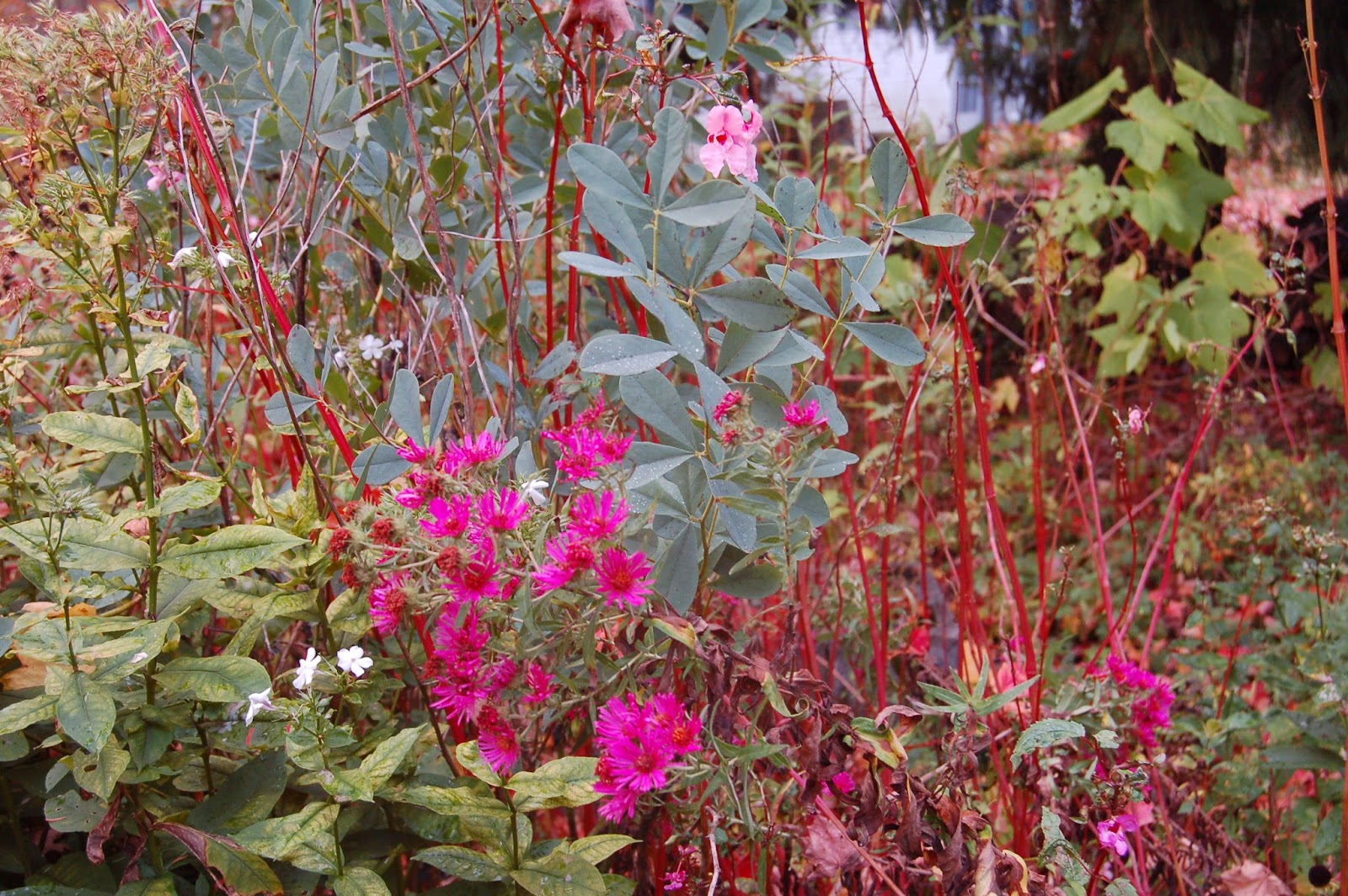 Let's start our visit in the backyard. Here, we discover bright rose asters in a sheltered nook. They are contrasting with the grey-blue color of a Blue False Indigo (Baptisia Australis), the red stems of Himalayan Balsam (Impatiens Glandulifera), one of them still sporting a single pink flower, and a few white flowers on a phlox. On the following photo, taken in the misty morning air, you can see the Himalayan Balsams still in bloom, their stems not quite red yet (this snap was taken at the end of September).  The small green seed pods are ready to explode at the slightest touch, scattering their seeds in all directions. There's a very short video on Wikipedia, showing this amazing phenomenon. 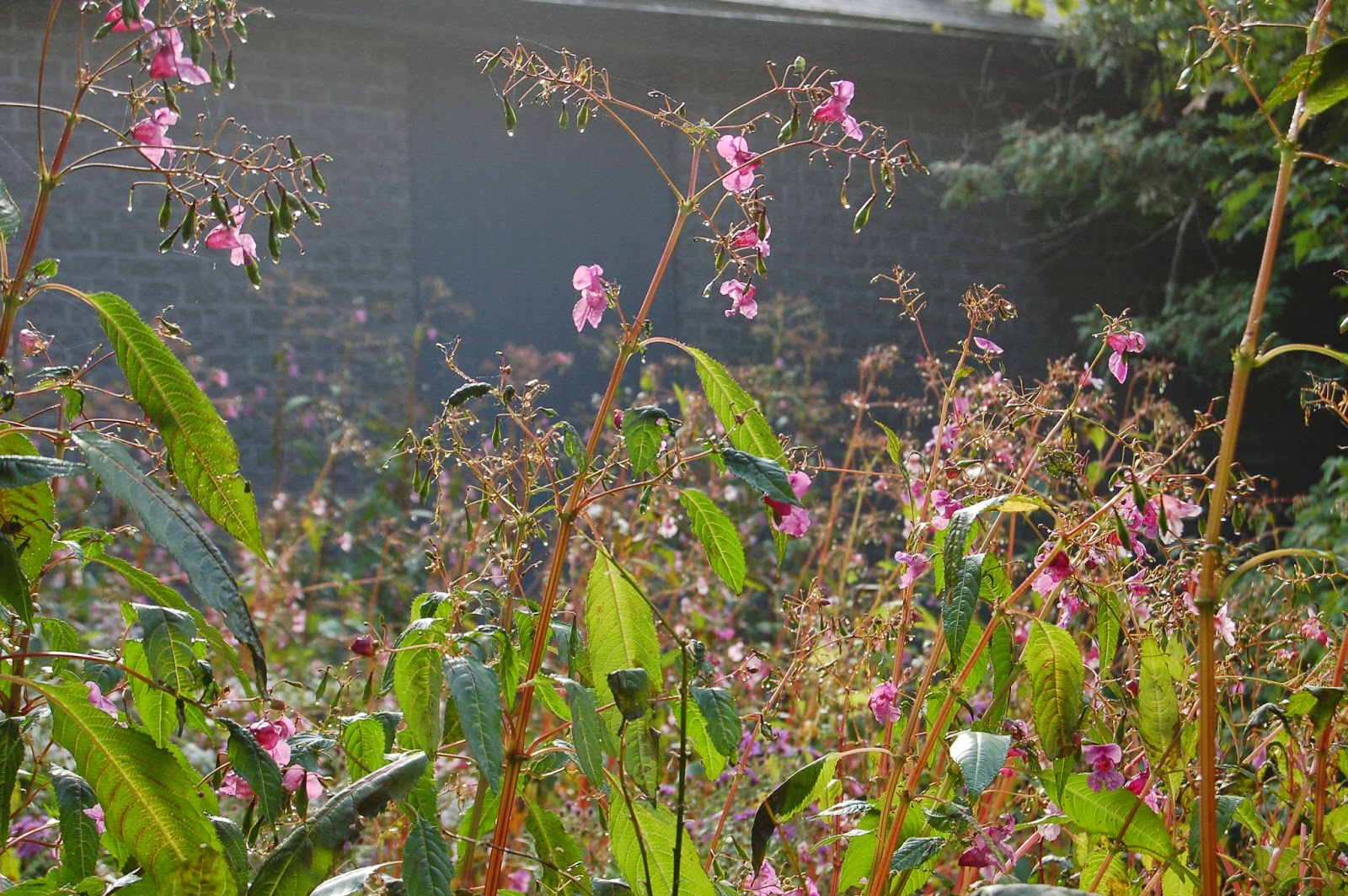 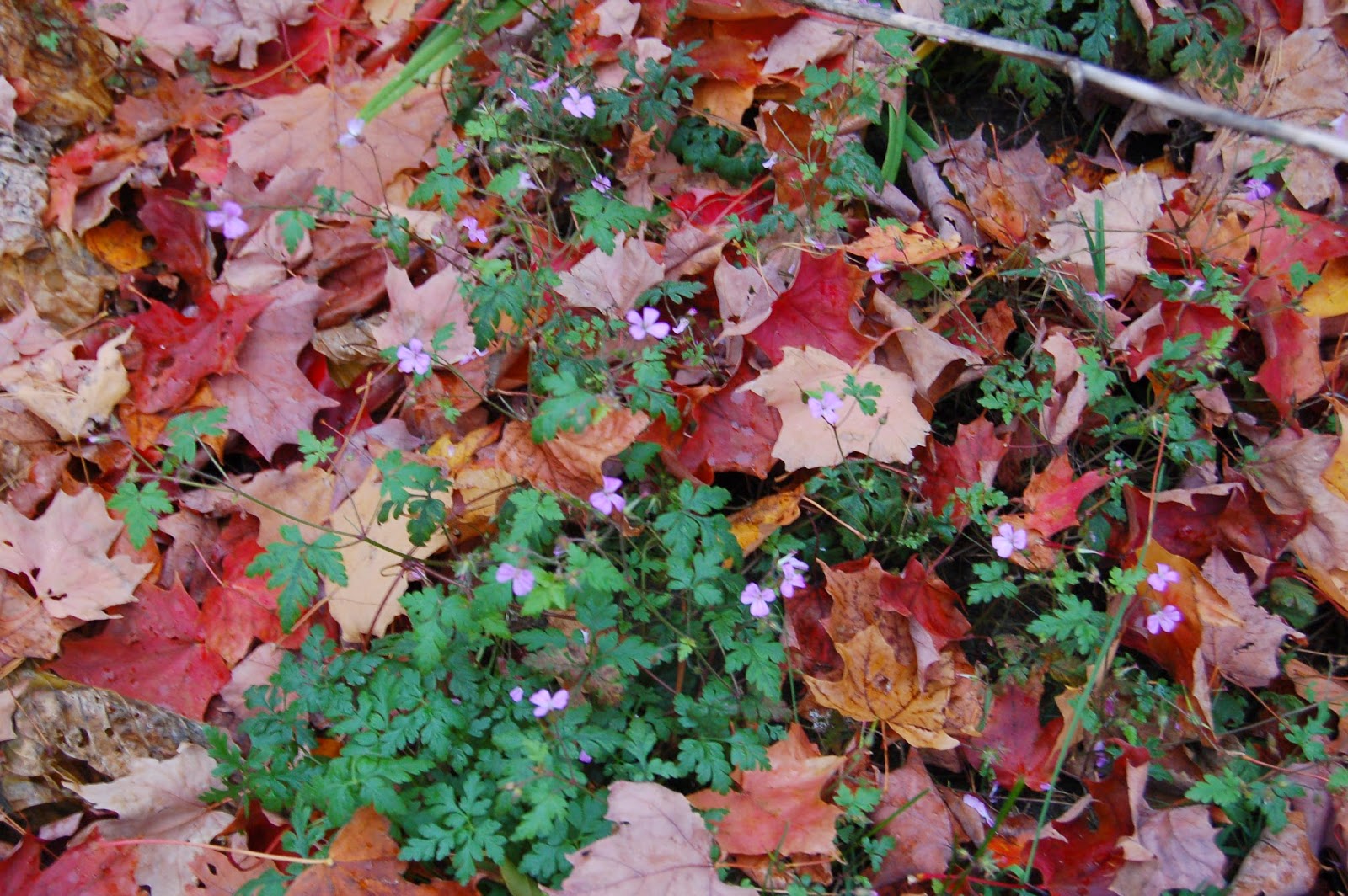 The picture on the left, the bright green, deeply cut foliage belongs to Herb Robert (Geranium Robertianum). This annual or bisannual plant grows very well in Quebec, in full sun as well as in part shade, and seeds itself abundantly. It produces cute little pink flowers all season long, from spring to killing frosts. We can make a healthy infusion of its leaves.

Come autumn, I let the falling tree leaves cover Herb Robert plants entirely. This way, these small plants remain green and alive under this protection. Until late in autumn, I can get out, dig a little in the brown autumn litter and pick up just enough fresh Herb Robert leaves to make myself a good cup of tea. 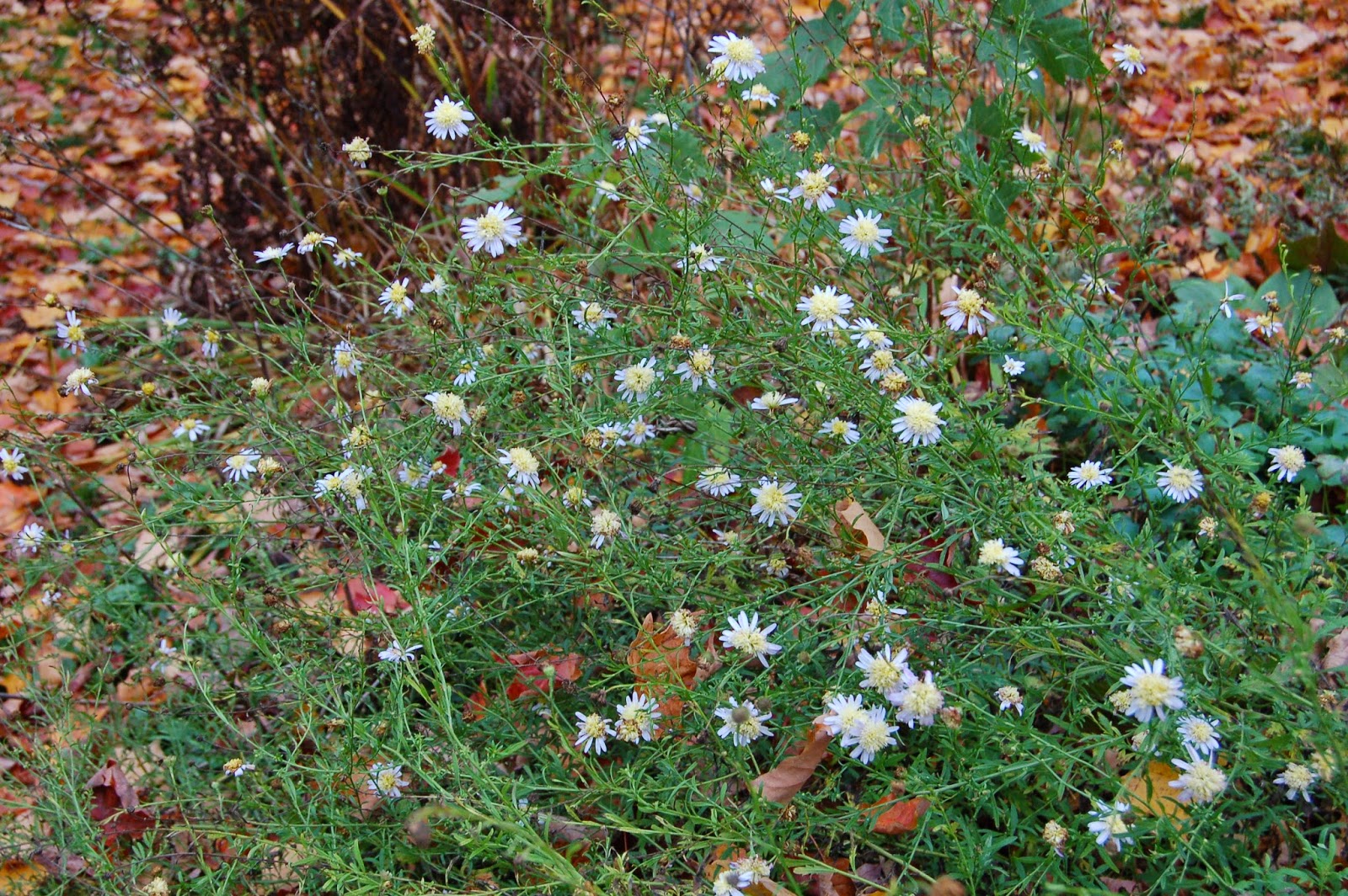 These abundant small-double white flowers with their butter-yellow hearts are the blooms of Kalimeris Pinnatifida "Hortensis". Hardy to canadian zone 3, this perennial can reach 90cm (3 feet) high and is easy to grow, blooming from mid-summer for three months and more, even in a partly shaded area, although it tends to spread and crawl in such a location. Its flowers are not afraid of a few frosts. It grows to a good size but it's not invasive, at least, not in my garden. 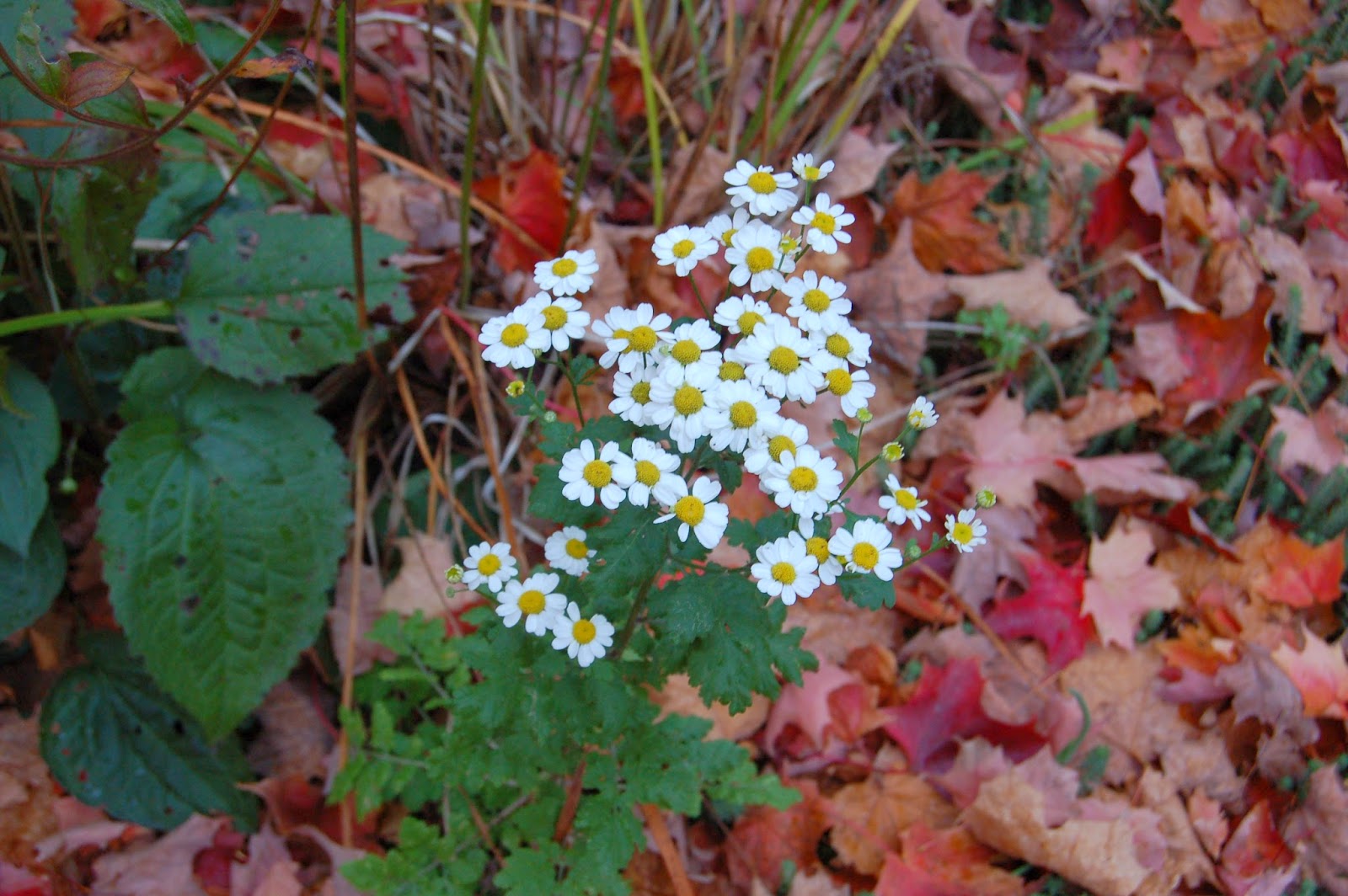 At your left, these small white, daisy-type flowers are of an unknown cultivar of Mayweed (Chrysanthemum Parthenium). They are short-lived perennials and seed themselves generously.

Some varieties of Mayweeds can bloom abundantly in open part-shade during a long period. I once had a double-flower cultivar that bloomed non stop from the beginning of summer right through autumn frosts.

The one species of Mayweed inhabitating my garden nowadays doesn't start blooming before the end of July and most plants will stop flowering one or two months later, but occasionnally, one individual will take its time and will still make its show in October ! 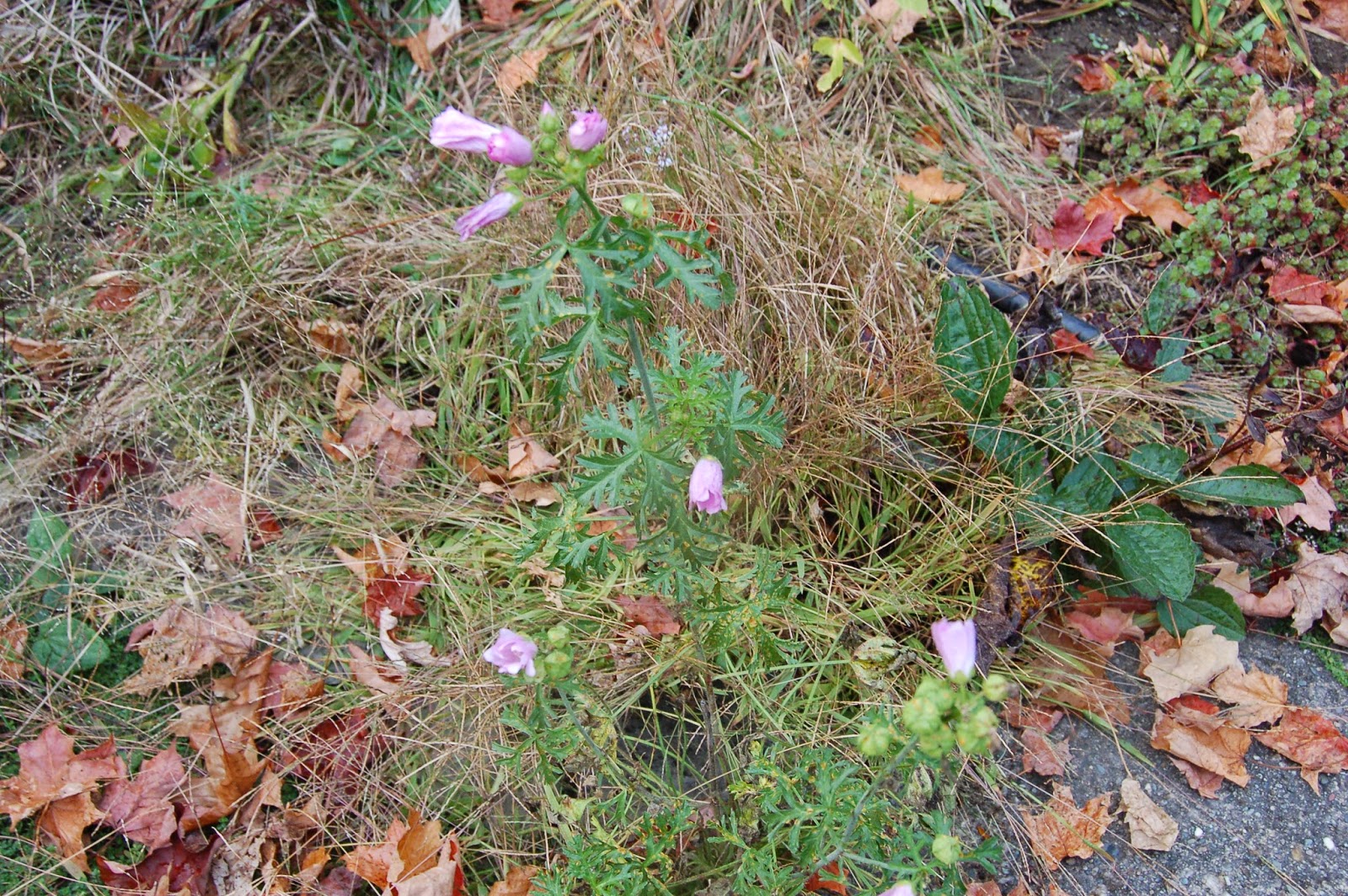 In the front yard, there is full sun that allow abundant and spectacular blooms, even in fall.

But let's start with a more humble perennial. Here, a plant of Musk-Mallow (Malva moshata) is still making the effort of blooming in a neglected spot. It's because I cut back its wilted blooms to avoid it to spread its seeds. Musk-Mallow leaves and seeds occasionally make an edible addition to our salads. As this photo has been taken very early in the morning, the flowers are not opened yet. 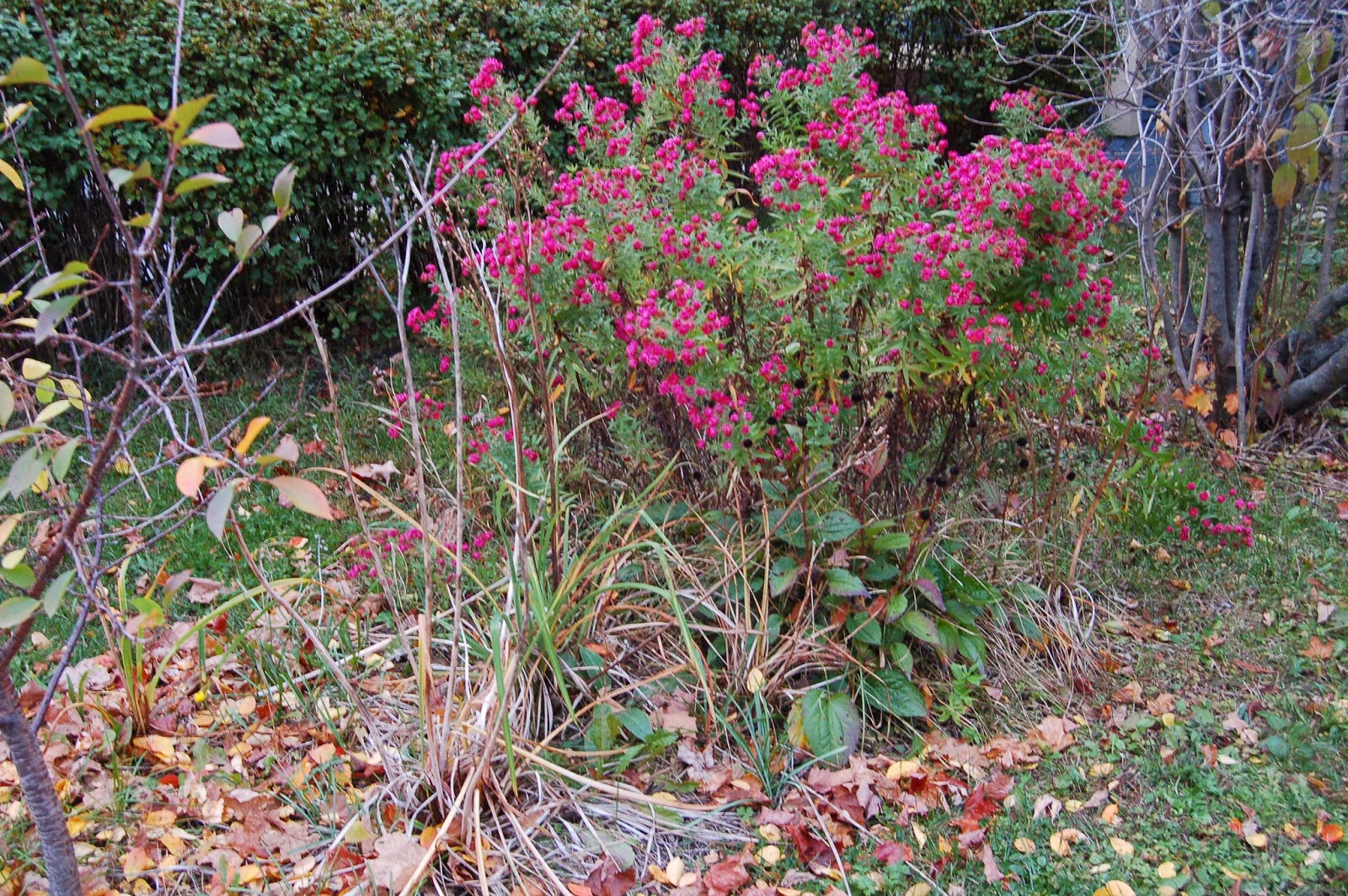 On this photo, let's take a look at one of my flower beds, located near the public sidewalk. It's a huge New-England Aster (Aster Novae Angliae or Symphyotrichum Novae Angliae, cultivar "Alma Potschke"), making a big show with its vibrant-rose flowers. Some other cultivars have colours as bright as this one, pure white or bright purple, for instance. Others present pastel shades. When the space allows it, teaming up aster cultivars of constrasting colours in the same bed can be very eye-catching.
Some species of autumn asters can be only 15cm (6in) high, acting as groundcovers. I have white ones from this category, but their last flowers died a few days before these photos were taken. Others are 60cm (2 feet) high, and still others can reach a respectful size and 90cm (3 feet) high, as shown in this photo.

At my Aster's foot, Black-eyed Susans (Rudbeckias Hirta) are done with their blooms, but I left in place their stems and black seed heads. If wild birds run out of food at the end of winter, they'll come to eat these seeds. But some will fall anyway and will make a more or less dense mat of new plants. In other words, I may end up with many more plants than I care to cultivate...

This big aster plant makes its show in a flower bed situated  near the public sidewalk. I presented you this very same bed in my  last article on spring bulbs. Here I take the liberty of reproducing two photos from this article, so you can compare this same spot at three different periods of the year. 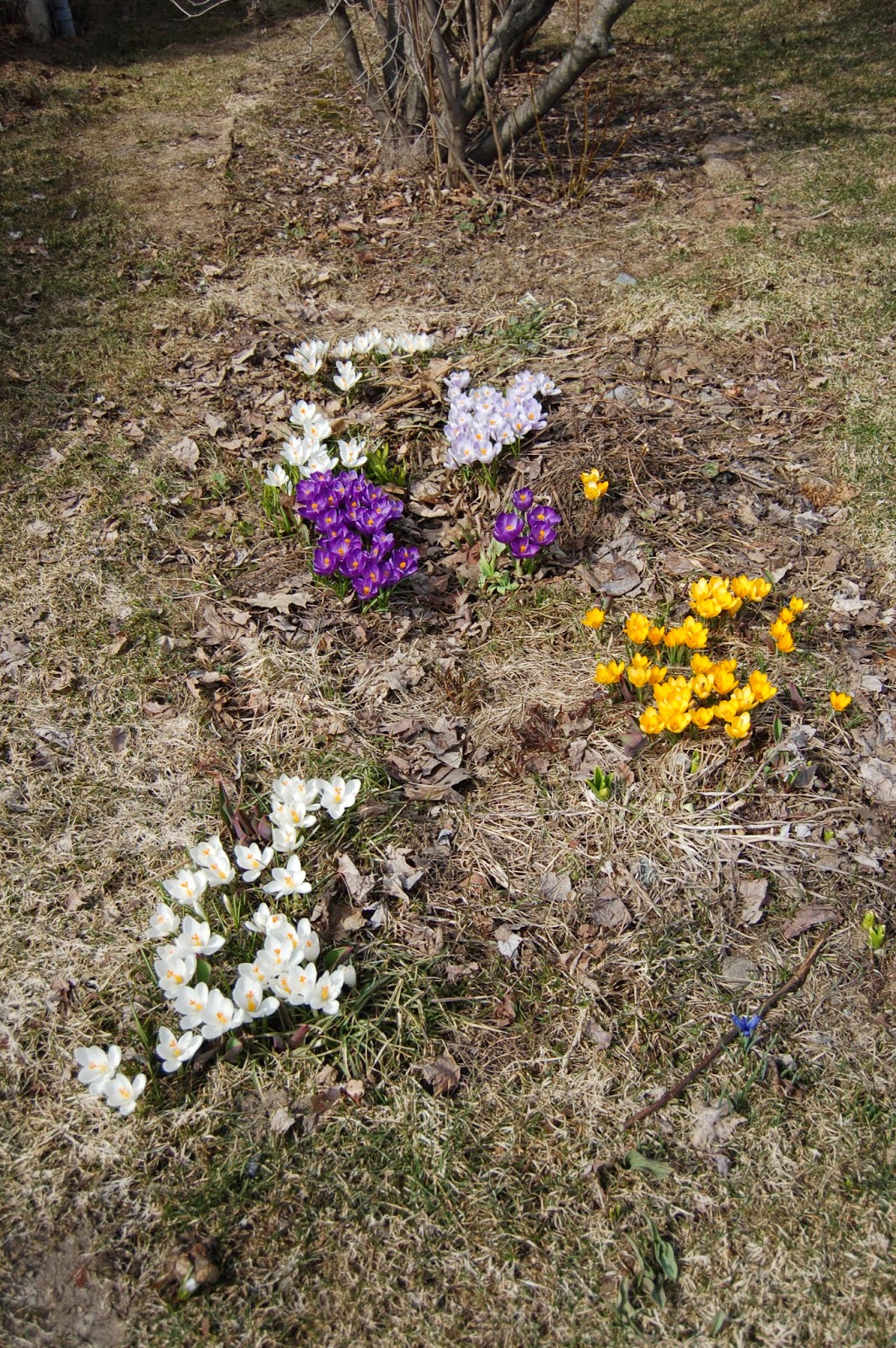 First photo : at the very beginning of april.

Here, I planted my crocuses in bunches of
different colours. They are so early that the
lawn didn't have the time to turn green again.

As you can see, it's impossible to detect the presence
of my aster plant, because the first stems didn't start to show up, yet. 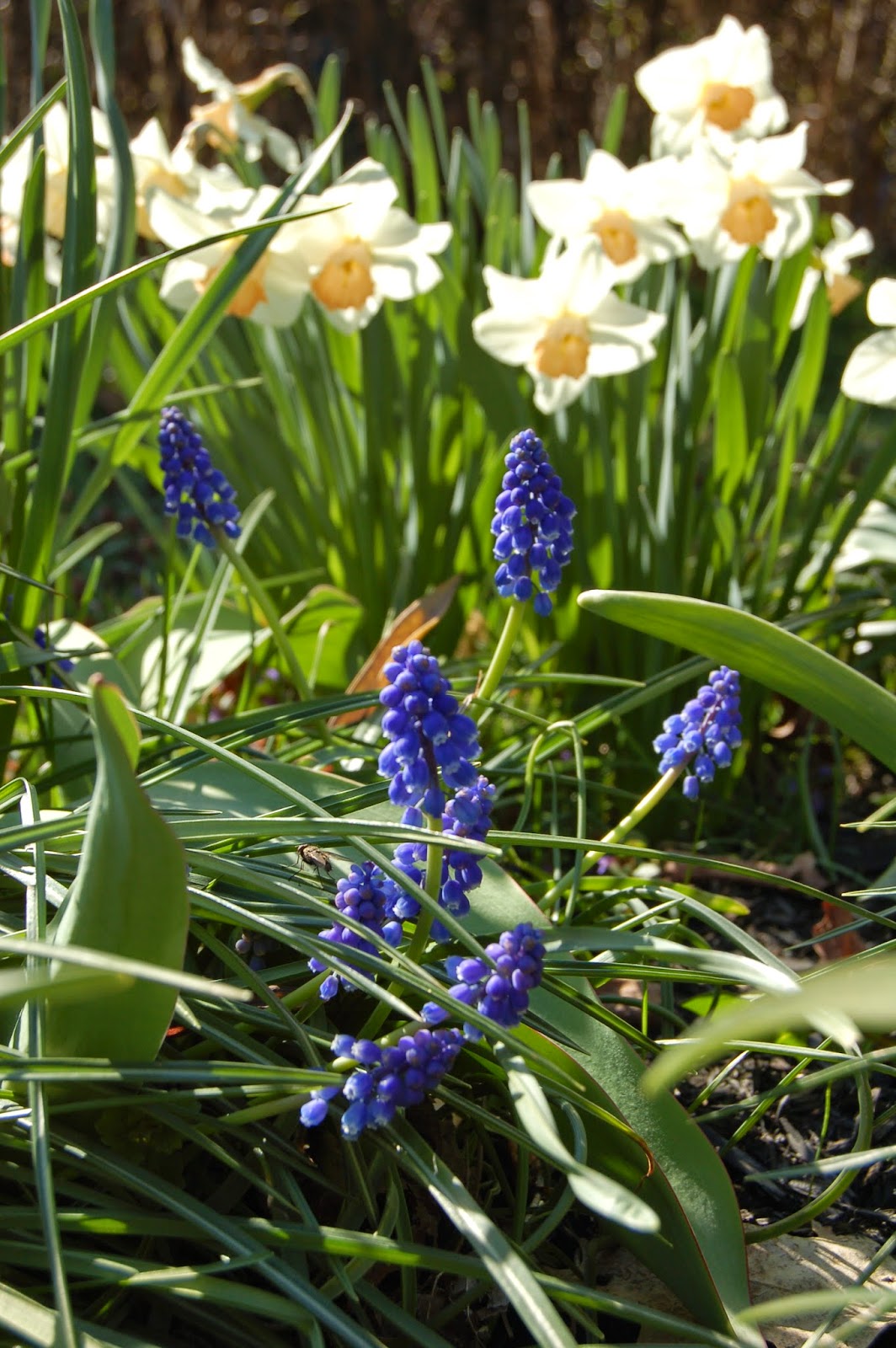 Every crocus bloom is gone, but the slender leaves are there, lying amongst the bright blue muscari flowers. We also see the big, fat leaf of a tulip bulb that will bloom only in June. Behind, daffodils are
in their full moment of glory.

In July, Giant onions (Allium Giganteum) will replace them.

In summer, still in this same flower bed, five varieties of daylilies bloomed in succession from mid-June to the end of September (sadly, I don't have a snap of this period to present you with). As for the Black-eyed Susans, they started flowering around the 20th of July, if I remember well. A few plants of pink Coneflowers (Echinacea) completed the picture. Nothing exotic, as the choice of summer blooming species goes, but I reached my goal : to get continuous blooms from spring to fall. 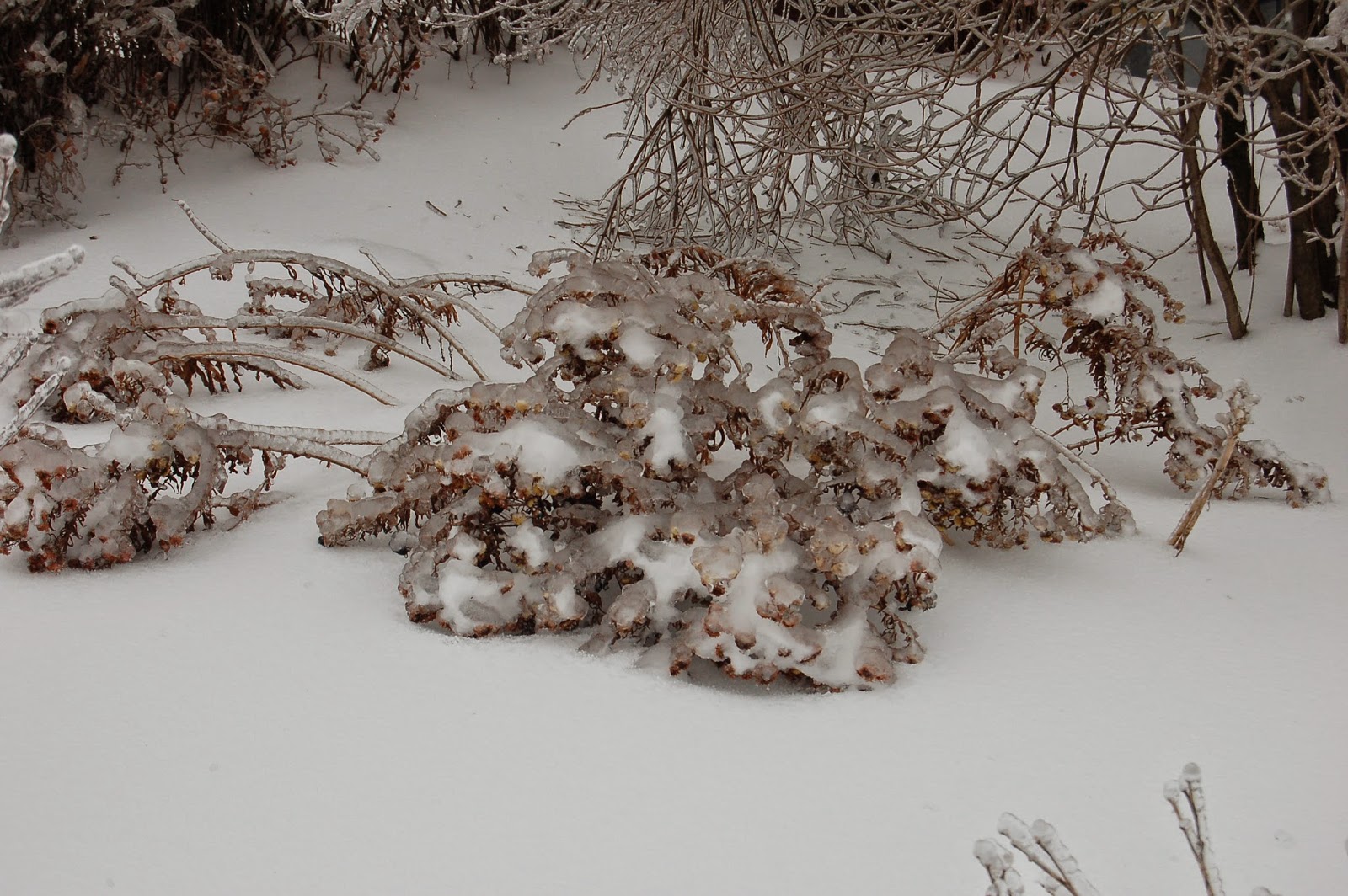 This third and last photo present you the same Aster clump, in the same flower bed, giving me an artistic bonus in December 2013: it morphed itself into a delicate ice sculpture with the help of an icestorm.

A little closer to the house, the very last daylily cultivar to bloom in my garden, this year (it was still blooming at the beginning of November, in fact), is called "Final Touch". But it's the first time ever it makes flowers so late. It produced numerous flower buds on 120cm (4 foot) high scapes. It is its fifth year in this spot of my garden.

Usually, "Autumn King" is the last  to bloom. It beats "Autumn Blaze" (red flowers on 60 to 80cm  scapes) and "Bitsy" (yellow flowers on 90cm scapes), which is one parent of the famous "Stella de Oro", by the way. All these cultivars are in bloom for a long time, 2 or 3 months - "Bitsy" being a rebloomer, with 2 to 3 blooming periods a year, is the first one, beginning very early in the spring.

Many of the fall blooming daylilies have a common sin : in cold weather, their flowers don't open completely. "Final Touch" is not the exception. But during milder day, the show of its' big, bicolor blooms redeems it completely, in my humble opinion. By the way, their hues may vary quite a lot. Sometimes, the petals will be of a solid, intense rose, as shown in this photo, and other times, they will turn towards orange. 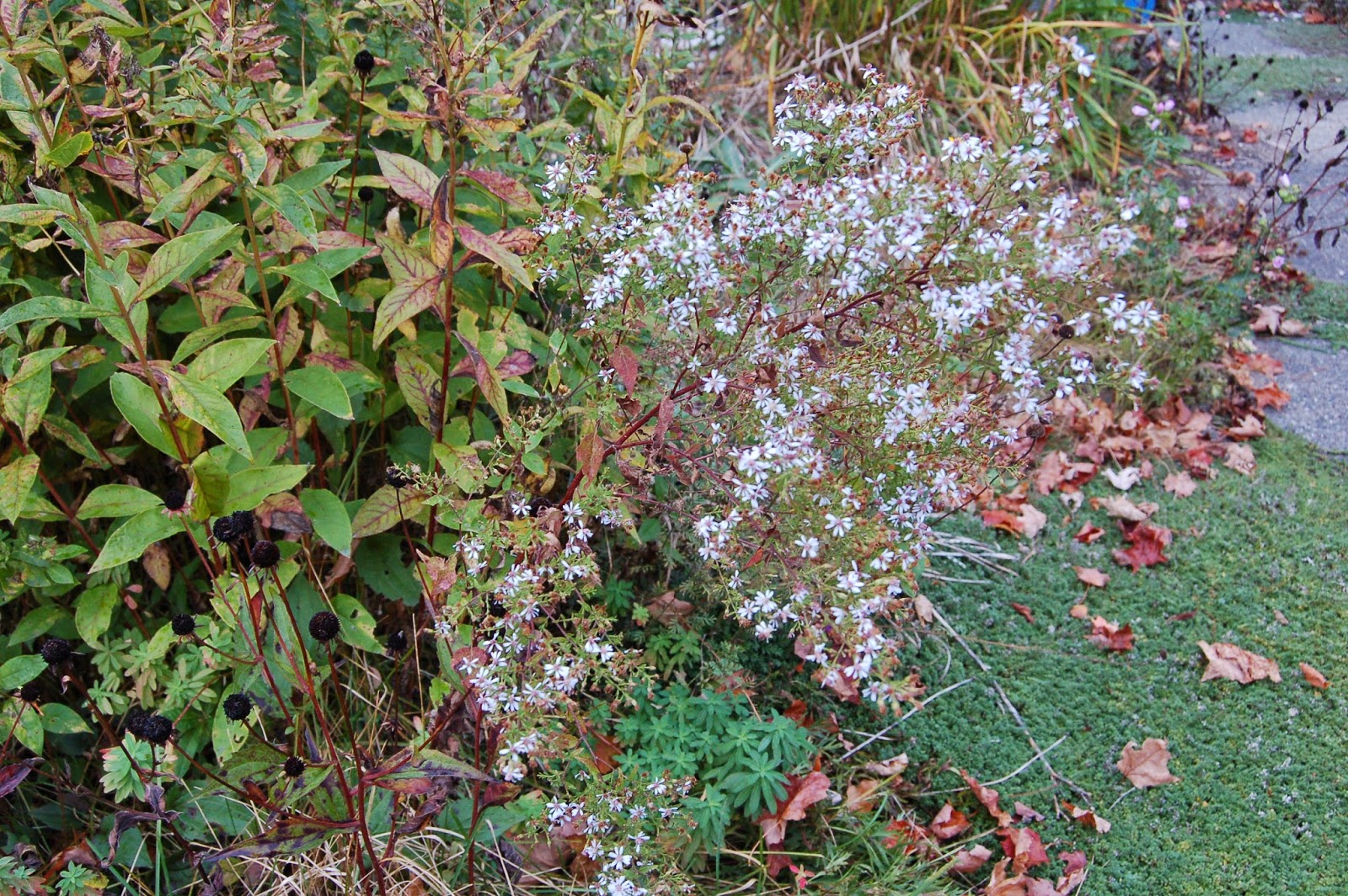 Every year, I allow some wild aster plants to bloom among my more civilized perennials. These rascals invited themselves without permission many years ago. I just happen to have a sweet spot for them, with their small but abundant flowers, usually powder blue, occasionnaly white, even though they threaten my garden with their invasive behaviour. They produce infinite quantities of seeds, you see, and the obvious way to keep them in check is to cut down every flower head before the seeds are formed and ripe. 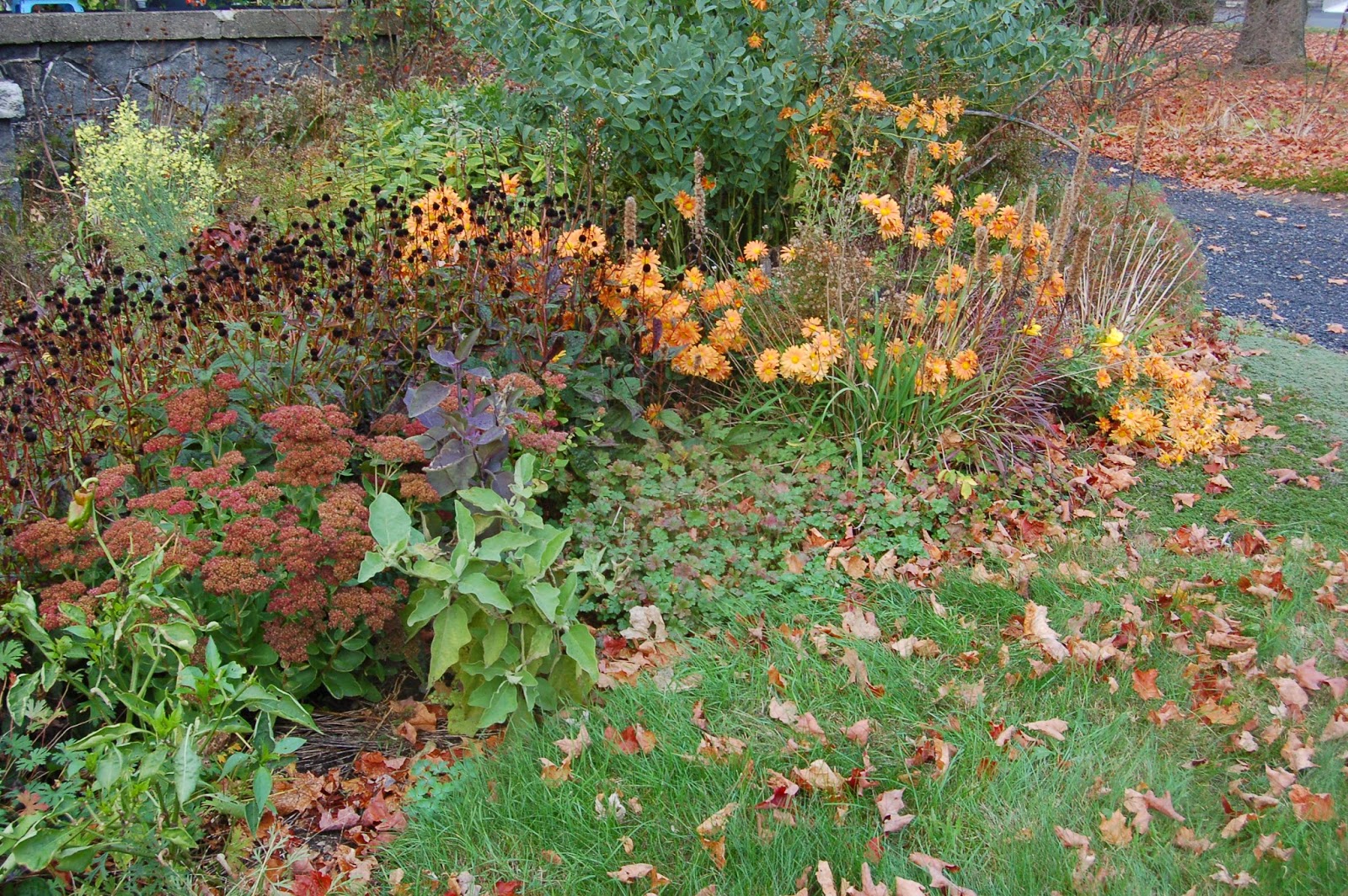 This clump of Mums, (Chrysanthemums "Mary Stoker"), which you were already acquainted with in a previous article, has no reason to envy my asters' good looks. Here, the numerous burnt-orange blooms are teaming with Showy Stonecrops (Sedum Spectabile or Hylotelephium spectabile) whose flower heads (left side of the photo) have a russet colour. Note the numerous seed heads of Black-eyed Susans, just behind the Stonecrops. Again at the left, but further behind, here is the surprise plant that I wanted to show you : its' leaves are a pale blue-grey and its' flowers are a very pale yellow. It is... 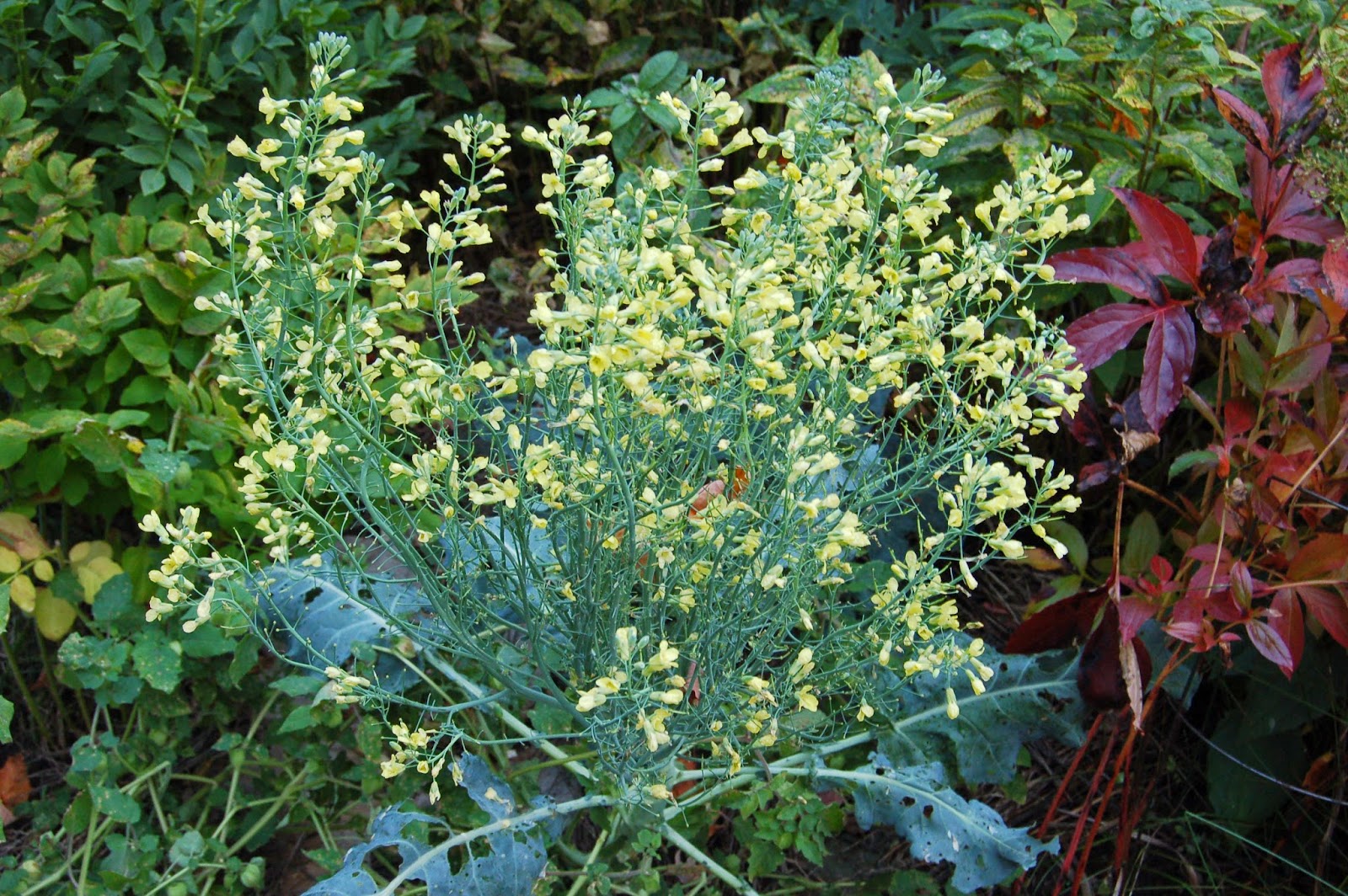 ... a brocoli, that I - involuntarily - allowed to bolt, because I waited too long before harvesting its head. Until it was too late !