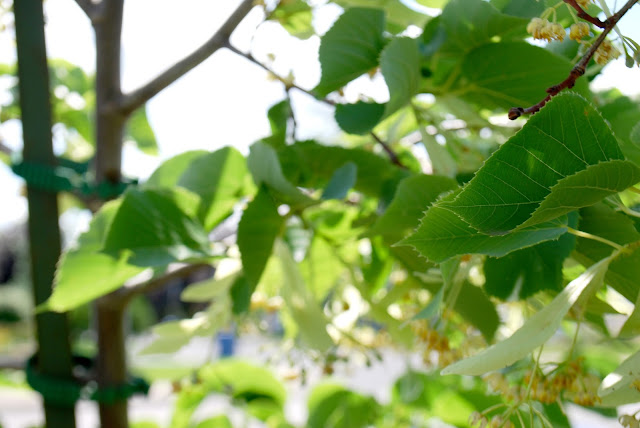 Hélène:
Did you know there's a tree which's leaves can be used in a salad? And the flowers can make one of the most exquisite herbal teas?

Enters Tilia, in latin (Lime, Linden or Basswood in English, tilleul in French - the name Linden comes from the germanic source Linde), but my little name for it is perennial lettuce, since the young heart-shaped leaves are delicious and - contrary to the standard annual lettuce - these leaves come back year after year without any input from me. That's a lot less work to do in the garden.

Linden and man have a common history that goes way back. In Europe, the Linden tree has been one of the symbols of the French revolution. He is, with the oak, the tree of justice where juristic procedures were held in its shade. Also the dance tree for the newlyweds, it's a symbol of friendship and celebrations, it's even on the coat of arms of a city in Alsace called Linthal (note the german source in the name). The smell of the flowers was revered by the priesthood as a sacred symbol too, so they planted the trees around their churches.

I learned about linden herbal tea through the Quebec enterprise la Courtisane. At the time, what charmed me most of their product line was the simplicity of the ingredient list, in this case just one: linden flowers. It's still today one of my favorite, a divine but smooth flavor and a beverage that has a slight pink hue. The flower is somewhat strange: it's waxy on the touch. Its perfume is apparently quite tempting for various pollinators (you thus have to wash the flowers quite well before drying them!).

It is worth to mention however that -according to the French Wikipedia (note that this information is not on the english version) on Linden tree and a further google search - there are a couple of varieties of lindens that are toxic for pollinators, apparently bumblebees especially, so select a variety that is alright for them, since the linden tree can be a major source of food when good. During the short summer flowering, one can ear the buzz of all the insects feasting on those delicious trees!

If you want to harvest your linden tree to make herbal tea like me and Louise do, you may collect only the flower, but you can also collect the unopened blossom, the fruits, the floral ramifications or the entire bract (those yellow, slim "wings" at the base of the ramifications of flowers). According to my experience, the unopened blossoms and fruits are harder to dry out properly but are good for tea too. The linden is also perfect in a blend: I bought a delicious herbal tea at the Fête du chocolat de Bromont, a mix of rooibos, linden flowers and citrus. 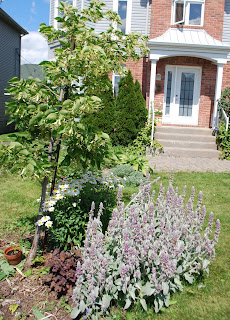 My linden tree is still very young : planted here in 2013, it was two or three years old. But it's already giving me plenty of flowers and the leaves are delicious. Here it is on the left with lamb's ear (Stachys Byzantina), daisies and a dark-leaved variety of Heuchera (the purplish leaves at the foot of the tiny tree).

When it grows, the linden tree will take a conical or rounded shape, depending on the variety. The shade a linden tree makes is dense and it can grow up to 35 meters, so think about it before placing it. I hope mine will make some shade for the front of my house, since it is exposed to South-West sun and therefore gets really hot inside during summer heatwaves.. 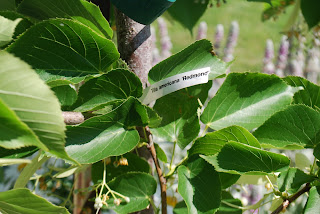 My linden variety is Tilia Americana "Redmond" and I can vouch for its good taste, from both leaf and flower. Other good varieties for consumption are Tilia Cordata "Greenspire" and the Tilia X Europaea, that last one's recommended by Martin Crawford, leader of the forest gardens movement. If the subject is of interest to you, Mr. Crawford wrote two excellent books about it: Creating a Forest Garden and How to Grow Perennial Vegetables. Althought the books are set in a Southern British climate, both are still of incredible value even here, in Québec

For consumption, young leaves are preferable, as mature leaves become tough- even thought they are still edible. They can of course be used in salads, but beyond that, they can be used in soups and stews. Their mucilage thickens the liquid in which it is added. Of course, young leaves are plentyful in springtime, but you may still collect them later in season since the tree generally continues to put forth new leaves. The harvest takes longer and is somewhat lessened, though,  since you have to find and select them among the others.

I agree with Hélène: lime leaves are scrumptious. In salads, I use them with other greens. I put them in sandwiches and berry smoothies. When I work in the garden, I nibble on some, whenever I passby the tree. I noticed that about ten leaves as a snack can sustain me until the next meal.

No wonder since they are a good protein source. I haven't tried it yet, but one can apparently make a very nutritious green flour out of it. One kilo of leaves can make 300g of flour. And there's yet pestos to try, blossoms to taste and I have to find out if the leaves can be frozen for winter use!

In permaculture, the linden tree is particularly appreciated since it's uses are many.
- It's an ornemental tree that can also make a good windbreak and that can support grape vines climbing on it.
- It can resist both drought and inondations and also windstorms. Some varieties are more resistant to snow and icestorms.
- The leaves can be given to cattle. I know from experience that lamas and white-tailed deers are fond of them and they can even eat the young branches.
- The tree is a dynamic potash and calcium accumulator. Therefore, the leaves it sheds in autumn are very welcome either in compost or as a mulch.
- It can support pollarding, and even coppicing, two woodland management techniques widely practiced in Europe, but not so much on the American continent. Actually, these techniques have the effect of prolonging the tree's lifespan. Those techniques, when practiced every 2 to 7 years, encourage the growth of low branches, making the harvesting that much easier. Done less frequently, the branches become longer and bigger. Those techniques may inhibit the flowering, though.
- The biggest branches can be used as firewood, posts, perches or even mushroom logs.
- The smaller branches are flexible enough to be braided for baskets.
- The wood is further used in cabinet making and instrument making. It is an easy wood to sculpt.
- From the inside bark, rope, carpet and even cloth can be made.
- The sap can be collected just like maple sap can be. It can be drinked as such or boiled down to syrup, but there is little sugar in it and so, one needs to collect a lot of sap to be able to make it into syrup.
- It has a lot of medicinal proprieties and is used in perfume too.

Hélène: In conclusion, this tree we can eat and drink, that offers plenty of shade, that's so beautiful and shares such a history with mankind, can it be said that it is such a gift from nature?