Rhubarb: juice, syrup and compote all at once

I mentionned previously that rhubarb was used in different ways besides compote or dessert in this household. My harvest at the end of August of 2016 gave me 6 kg (13 lbs) of rhubarb cut out in cubes. It took me 3 hours to wash, peel and dice the stuff (I did it in front of the tv, it helps). The following evening, out of this quantity, I used a little over 2 kg to cook the triple recipe I'm describing here. I was mixing with one hand and taking pictures with the other! I didn't precisely note how much time each step took, but after 90 minutes, I was scrubbing the last corner of my kitchen counter  before closing the room for the night.

Here, in pictures, is my step by step  process to make, in order:
- Non sweetened juice that can replace  lemon juice in recipes.
- Sweetened juice or syrup (depending  on the consistency), that is the base for  a sparkly drink.
- Compote that's less acidic than the  traditionnal recipes. 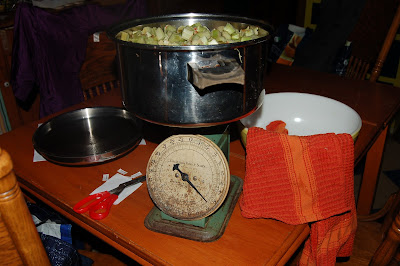 - 5 pounds (2,27Kg) of rhubarb, peeled  and diced, that gave me a volume of 5,5  liters. (Hélène on her side doesn't bother  peeling the rhubarb. Her juice comes out  pinker than mine.)
- 1 cup of water.
- Sugar according to your taste (I  added  about 1,5 cups). You can replace  sugar with another type of sugaring  ingredient. Maple syrup, for instance.

- Cooking pot of 6 liters with a lid
- Wooden spoon
- Small sieve (made out of metal is fine)
- Small bowl or measuring cup to collect the juice
- Big sieve
- 2 big bowls
- Measuring cup for the sugar
- Jam funnel (big hole for the jam to pass through)
- Glass mason jars
- Funnel for the liquid
- Empty bottles, small containers for the juice and syrup

1. Place the rhubarb dices in your cooking pot and add the water.

2. Over a medium flame, bring to a boil while stiring regularly so the rhubarb doesn't stick to the bottom of the pot and burn. Adjust the heat if needed.

3. Bring the heat down and let simmer until the dices are soft and start to fall apart under the pressure of your spoon (photo 1). In traditionnal recipes, cooking takes a lot longer to give time for most of the liquid to evaporate. By collecting this liquid, we collect a useful byproduct instead of wasting it. Even better, we save time by skipping the evaporating step altogether.

4. Sink the ladle slowly in the compote so only juice will trickle into it (photo 1).


5. Pass this juice through the small sieve placed over the measuring cup or over a small container that can resist high heat (photo 2).

6. The sieve will catch any rhubarb pulp that ended up in your ladle (photo 3). It's pretty much inevitable, so just put it back in the cooking pot after the juice has been extracted.

7. Let the juice cool. Once it is done, you can freeze it in smaller portions and use it instead of using lemon juice. I give instructions on the freezing process under Photo 10.

8. Incorporate the sugar and let the compote cook for 10 more minutes so the sugar as time to dissolve (photo 4).

9. Carefully transfer the compote into the big sieve that you put over a bowl. The juice will slowly pass into the bowl. Of course, the tighter the weaving of your sieve is, the less pulp will pass through, too (photo 5). You can also use cheesecloth to have a better filtration process.

Place the pulp left in the sieve in another big bowl and pursue the operation until all the compote has been separated: juice on one side, pulp on the other (photo 6). I think it's a good idea to leave a little bit of juice in the compote, so it doesn't end up tasteless and dry, but also because the rhubarb juice is sufficiently acidic to prevent bacteria formation.

10.To obtain a syrup, put the juice back on the stove and let it evaporate until the consistency of syrup is achieved.


10. Put back the pulp in the cooking pot and bring back to a boil while stirring frequently to prevent burning. Taste it and add sugar if needed (photo 7).

11. The compote is ready. You can let it cool for either further freezing it or simply putting it in the fridge.

You can also transfer it still blistering hot in sterilized Mason jars, close them tight, put them in a large pot  and cook them in boiling water for twenty minutes. It's the basic canning method that you can find all over the net. Here's one. Here's Ricardo's method, if you don't mind reading it in French.

I recently used my non sweetened juice on fish - replacing the classic lemon juice. I used it on apples to prevent them turning brown and I used it in a couple of recipes that called for standard lemon juice. I added it to a cocktail and I used it as a base for lemonade.
As for the syrup and the sweetened juice, there are a couple of things that I can envision: adding a dash over ice cream or drizzle some on fresh fruits, for instance. But up to now, my preference goes to a simple drink : half rhubarb juice with half carbonated natural source water, add a couple of ice cubes and drink in good company. Cheers!
Publié par Dames 3Jardins à 20:43