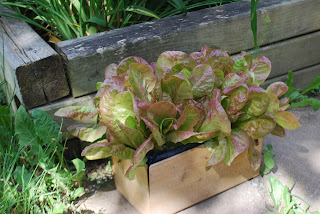 What a wonderful year! The spring weather was somewhat unusual: there was snow until May and then it got warm really fast, skipping that brisk period so much loved by certain vegetables. Noticing that, I took a big decision: I didn't plant those cool weather vegetables. Sorry, broccolis, cauliflowers or cabbages. However, I did plant a bit of peas in containers, as I usually do  - they didn't do well at all. I also planted a bit of lettuces but the only ones that produced well did so because I placed them in the shade (exhibit A, the photo to the left).  You see, here in my garden, temperatures were reliably warm, even at night, from mid-May to mid-September. Whatever vegetables and fruits that thrive in warm, sunny weather did amazingly well this year - I'm thinking mostly about nightshade and cucurbitaceae families. 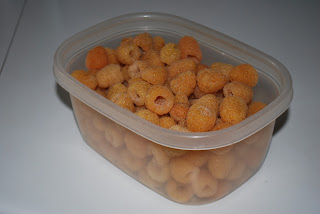 Successes:
I'm pretty sure I mention fruits of the garden as being successes every year. This one is no exeption of course because it is the crowning achievement of this garden. I'll give the classical mention for the strawberries and golden raspberries. A quick mention goes to the 31 delicious peaches I collected, here's the article for further details.

The juneberries have made so many fruits - so many - that for the first time ever I was able to cook with them. See, in my homestead, these berries are always eaten fresh up to the last one. With an 8 year-old kid who never had to be begged to eat fresh fruit, there was never any left for further projects. This year, the shear quantity surpassed even my son's enthousiasm for eating them fresh. 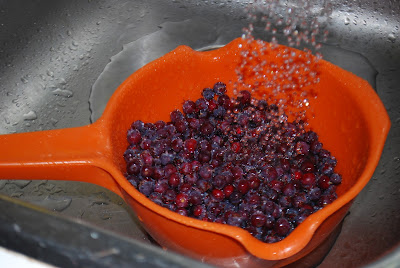 What was only one or two branches of redcurrant became a real harvest this year. But I don't really like the taste of redcurrant. It's an acidic and very sour fruit, even when it's ripe. So I mixed it with some juneberries to make a delicious jam I'll enjoy this winter.

The new fruit this year are grapes! I had grape vines for many years. A white one, Prairie Star that died off unfortunately and a red one called Valiant that I transplanted - oh - 3 times in 6 years. This year, it really gave lots of fruits! I didn't like them all that much, unfortunately. The taste wasn't bad but this variety as a lot of big pips. Furthermore, the skin wasn't good and the meat stays a small ball from which the aforementionned pips are hard to extract without crunching them. So instead, I made jelly!
I risked planting melons this year. I never had luck with these years passed but with such weather, I thought that this would be the best time for success. And I was right! For the first time I harvested 2 tiny melons called "Collective Farm Woman", a melon coming from Ukraine! Apparently it preserves for a long time but we never got to test this and ate them as soon as they were harvested.

The failures:
Of all the fruits I get in spring, two didn't make anything. I have dwarf blueberries and arctic kiwis on the front of my propriety but althought they were heavy with flowers, they didn't bear anything. I'll speak more about this in the "surprises" section of this article.

Beans had some difficulties, but are not a total loss, either. The first variety I'm talking about is called Nebraska Beauty, it looks a lot like Jacob's Cattle, but is a climber instead of a bush and is ready to harvest later. It was a good success, let's say it. The next variety, Mandan Black (the tiny completely black bean on the top of the bean pile on the picture below) didn't produce a lot of beans but still did better than the black variety I had from last year called Hopi Black. My Scarlet Runner have produced amazingly, as always, but the Painted Lady didn't. Finally, the two white varieties that can be seen on the picture below are called Early Mohawk (cream and mauve, it did well) and Jumbo Roma (cream and coffee stripes, it didn't do well but had potential) - that last variety succombed to an illness where the pod became twisted and broken and thus the beans themselves suffered.

The surprises:
Again this year, the snails had a good presence throughout the garden! But beyond these shelled gastropods, there were many other surprises!

To continue the discussion about my blueberries and kiwis who would flower but not fruit, I have a theory about the cause that cristallyzed itself this spring (althought the phenomenon has been ongoing for a couple of years, now).
So I have on the front of my house a couple of dwarf blueberry plants and two vines of arctic kiwis (Actinidia Kolomikta), since the kiwi needs both a male and a female plant to bare fruits. My two kiwis climb on both sides of my front stairs and make a quantity of flowers in synchronicity (this year the flowers promised an amazing amount of fruits), but no fruits came out of that... Same for the blueberries that produced a lot of flowers but no fruits. And that's where I noticed how few pollinating insects visited that specific spot in the garden, during the blooming time of these plants. If I find the right type of flowering perennials that attract pollinators at that time, maybe - just maybe - my problem would be solved.  Only time will tell...
Another weird thing that happened is pictured below. Some years ago, I installed creeping thyme between the  veranda's stones in the garden... Now this thyme has colonised a lot of it and is doing well. But when it flowered, surprise! One of the tuft beared white blooms. I didn't add a different plant of anything, that happened on its own. It's similar to that mystery that make my Painted Lady beans come out a different color than the beans I plant (I speak about that happenstance in this article, it's located around the three quarter of it). 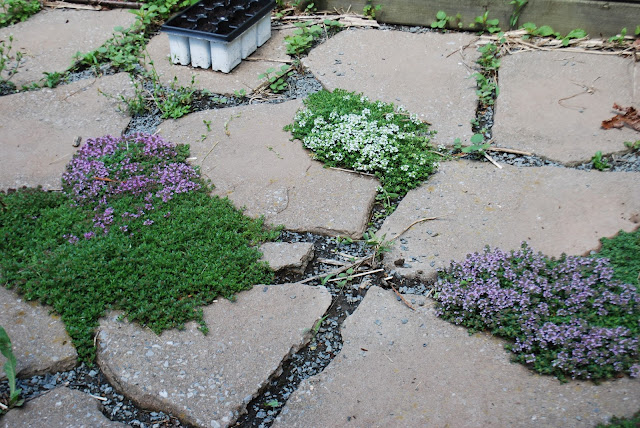 Conclusion:
The beauty of my garden is especially breathtaking in spring and the beginning of summer. I have yet to find the trick to make it last all season: my autumn garden looks especially unkempt. Here's some pictures expressing the spring beauty here. 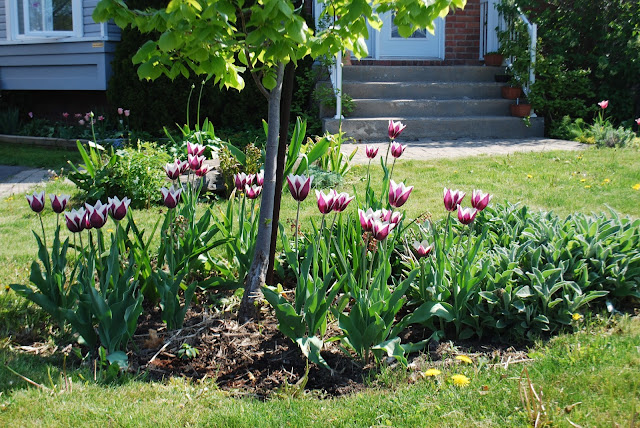 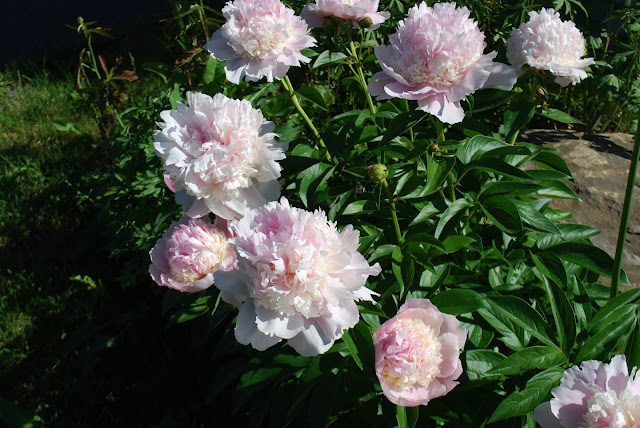 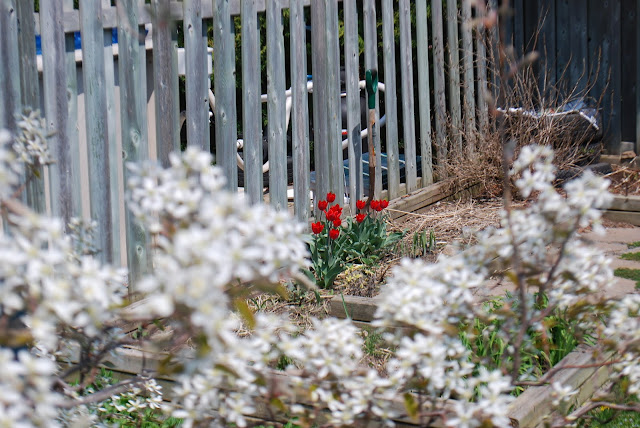 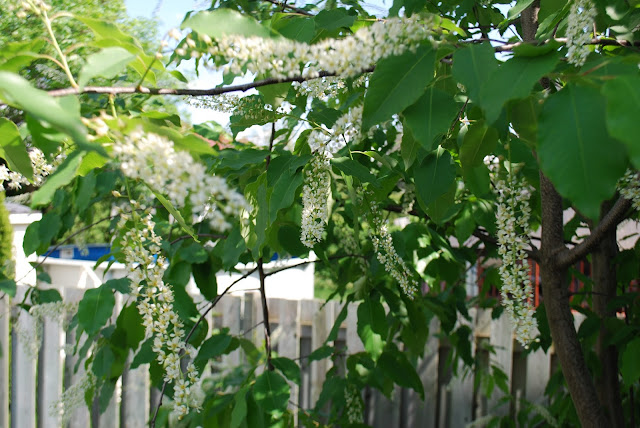 Side note:
Many cities have interesting programs aimed at protecting the environment available for their residents. Here, my municipality distributes rain barrels to the residents at very good prices. I got the pleasure to have one this year and I'm so happy about it! I wholeheartedly suggest you to enquire what's available in your own communities - you could have a lot of good things coming your way too! 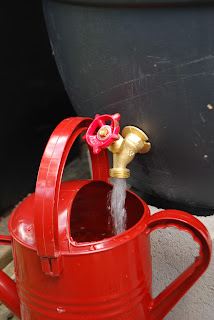