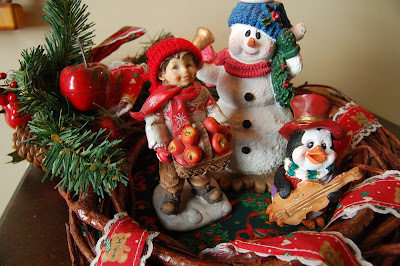 Intrigued by this article's title ?

First, let me wish you a Happy New Year and, above all, wish you a frame of mind that allows you to appreciate each and every benediction coming your way, no matter how small.

I think it's important to cultivate the art of appreciation, for this act of thought is essential to experience joy.

This is my humble word of wisdom for 2018. It may seem idiot, but personally, I put a lot of attention to the small details and events in day to day life, always looking for the ones which may contribute to my happiness. They are simple events, like the sound of the cracking snow under my footsteps, the crispness of fresh air rushing in my lungs or... the pleasure of growing radish greens under my roof in the middle of winter.

My pathway from red radishes to green radishes :


Each time I plant radishes in Springtime, a few of them don't form this nice, crunchy, delicious red ball that I worked for. In its' place, are forming inedible runt roots. A real deception. A few years ago, a little out of lazyness, but also because of a lack of time, instead of yanking them out, I let grow a bunch of these plants, supported by malformed roots. But these guys produced vigorous plants, bearing lots of flowers which, in turn, generously produced numerous seedpods.

I kept on ignoring them, letting them mature and turn brown. You see, I didn't know yet that these seedpods were perfectly edible, when still young, pale green and tender. For instance, we can bring them to the table in their raw state in a salad, or toss them in a wok along with other ingredients for a sauté,

Finally, at the end of the season, I came back to these degenerate plants. And at that moment, without thinking much about it, I decided to collect their many pods.
It took me a lot of time to shell them, but it's the kind of task that I like doing while watching TV, browsing on internet or listening to the radio.

Up to the moment when I reflected on the quality of these seeds. Originating from diformed parents could have repercussions on their genetic heritage... and lend a similar failure. Now, it was out of question to give away precious space in the vegetable patch and to risk a harvest failure ! Why didn't I think of this unpleasant outcome sooner ?


That's how these seeds were left in a box during the next couple of year. Why I didn't throw them right away in the chicken coop is still a mystery to me. But it was a chance, because eventually, a much brighter idea crossed my mind : since these seeds are perfectly capable to germinate and produce vigourous plants, like their parents, I may as well open my mind and finally recognize that they may be a good food source, even if it would be different from what I expected in the first place. Anyway, in the event that I wouldn't like their taste as green shoots, my hens would, especially in the middle of winter.

That's how, starting in mid-november, I re-used food-packaging trays, filling them up with a good quality potting mix and then, seeding them with my "bad quality" radish seeds. After that, I repeated the operation each week. The young shoots grew very fast.

I let grow some kinds of greens long enough to let them mature quite close to their full size. It's the case for corn salad and mini pak choi. I seed about 16 individuals per food-packaging trays. About one month and a half later, I start my harvest with the biggest plants. It leaves more space for their smaller neighbors. I keep on harvesting selectively, letting the less vigorous individuals more time to grow.

But in the case of mustard and radish, I seek micro-greens, so I seed very densely, between 100 and 200 seeds per tray. The radishes grow much faster than the mustards and I can harvest them after 15 to 20 days, clipping them away with my scissors.

A handful of radish greens can decorate a plate or season a salad. They have a milder taste then radish roots or mustard greens, but they bring freshness to your meal and taste a lot better than mature leaves. Once my harvest is completed, I re-use the potting mix right in the same container and I reseed.

Radishes are more versatile than what we think generally :

They are a very common vegetable. Wikipedia informs us that : "About seven million tons of radishes are produced every year, representing roughly 2% of global vegetable production".

To sum it up, we can eat different parts of the plant. The young shoots are delicious. We can grow them in soil, as I just showed you, or sprout them in a glass container. Hélène explains how to do germinations in this article.
In springtime, we can seed them directly in the soil and wait for their roots to form. According to the variety or species, they will be red, white, yellow, pink, purple, gray-black or even two-coloured. Their taste vary from mild to very sharp.
Did you know that we can cook radishes ? For instance, we can slice them, brown them in oil or butter, cover them with water and boil them until our prefered level of tenderness. I plan to try this roasted radishes recipe. And if we like their mature leaves, we can use them in a salad, a soup, a sauté.
In Novembre 2013, Hélène showed us her batch of lacto-fermented radishes, her favorite way to prepare them.
But if we let the plants grow until forming seedpods, we can munch them when they are still young, tender and juicy or pickle them. It is said that radish flowers have a nice peppery taste. I'm sure that next time I'll stop to look at these nice flowers, this notion will cross my mind again. And if ever I forget again a runt or two, I'll make sure to harvest their seeds again and grow them right in the middle of winter !