Harvest under the blanket of snow

﻿Hélène :
Today in the backyard, the tranquility was only broken by the sound of the snow melting. This noise is remindful of rain, albeit without any sign of it. It's because last week, temperatures hovered around the 20 degrees (celcius) and this week it's around zero. And then it happened : last night a soft snow fell. We always worry for our plants in such times, especially our tulips and our trees - magnolia, lilac, personally my juneberry and my peach tree. But this snow melts fast, something we can attest to on these pictures : as I'm writing, most of it is already gone.

And so the ground, which had plenty of time to thaw last week, is still workable. It's with this in mind that I made my way to the garden, in this peaceful beauty, and that I decided it was time to harvest a special vegetable I had purposefully left out of the harvest last fall, hoping to collect it this spring.

One heave of the shovel and voilà! Plump Jerusalem Artichokes showed! Helianthus Tuberosus, a remarkable plant, one that looks a bit like sunflower, but a whole deal taller, makes amazing edible tubers similar to the potato. It is rich in inulin and offers the benefit of having no starch (for those who can't have starch, take note). It was widely cultivated by amerindian tribes and has been often quoted as a good replacement for the potato. Here's the wikipedia page on the subject.

And regarding what's left in the ground, here's the catch. Jerusalem artichokes are very invasive. So if you attempt to grow some in your garden, make sure to locate them in an area where you can control them.

Louise :
Jerusalem artichoke's tubers are like corn : They taste much better eaten fresh, not long after harvest.

They also have similarities with beans... they give gas. To avoid this with beans, the old trick is to add to the soaking water a bit of baking soda (don't use that water after however). Some persons claim that we can also use baking soda in the cooking water of Jerusalem artichokes, but I didn't try it yet. My trick is simply to eat them as fresh as possible and it doesn't give me any gas. So it's a major advantage to have them in your garden ready for the picking whenever you actually need them! 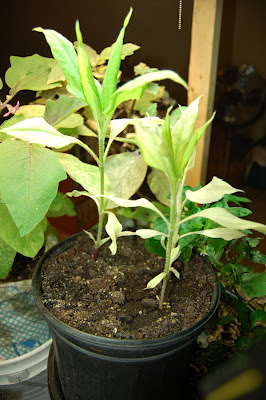 Jerusalem artichokes have similarities with rhubarb too : once settled, they will virtually always come back because whenever you forget a tuber in the ground, a new plant will sprout from it (and it's not quite that easy to catch them all). I didn't choose a space yet where I want them "there forever", so I settled on making them grow in containers. It's a method that works perfectly well apparently, but one has to be careful to choose a very cheap plastic container, since the tubers have been known to deform them badly as they multiply and take up all the space inside.

I planted 4 tubers inside in a big pot that previously contained a perrenial bought at a nursery. The plants will grow outside all summer and I'll be able to harvest the tubers in late fall.

﻿﻿
Hélène :
I would have liked to harvest my tubers last fall but spring offers so little in term of food that I resigned myself to try a spring harvest instead and that's how I came around to do my first harvest under the snow.