﻿Louise :
﻿﻿﻿﻿Well, it is not fresh news : the time for making maple syrup is over. It's started earlier than usual here, because of the fair weather we had at the end of winter. I'm already anxious for the next season!
For the 2012 round, we haven't produce as much as we could have : We waited too long to tap our trees.
Quite unfortunate, the sirup's quality was very high. Anyway, what we produced (about 2,5 liters) was all worthwhile, as much for the product itself as for the sheer pleasure.
I thought I could publish this article way before the season ended, alas! I haven't made the deadline. But it is not a loss since my topic here is to share my personnal experience with gardeners new to this bounty, who might be tempted to try it next year.
If you do want this adventure, it's actually a good idea to think and to prepare yourself a year in advance. First, you'll need to know what kind of maple trees you have in your yard. A fast internet search and you are there. Here's a very useful link for winter identification of maple trees. Or you have this this app, if you are technologically inclined.
Take note that you can successfully tap sugar maple (Acer Saccharum), but you could do so with black, red or silver maple as well, and even boxelder maple.  The sugar concentration will vary from one species to another.
It's also possible to tap birch, but the sugar concentration in its sap is less important, so you'll need 100 liters of birch sap to make 1 liter of syrup and this syrup will taste... like molasses ! By the way, the production method to make syrup out of this tree is not exactly the same as for maple syrup, and the harvesting season differs too.  I learned recently that you can tap poplar trees and walnut trees as well. I suppose each gives a syrup with a distinctive flavor.
So, do you have a few maple trees in your yard? Then harvest is near at hand. No such luck? What if a neighbor had some ? Or maybe a cousin ? Grandma ? You could offer your services as a voluntary acericultor and share the harvest with the owner !
Here is my personnal technique to harvest maple sap. If however you want to do it in a more sophisticated fashion, I have placed useful links at the bottom of this article. 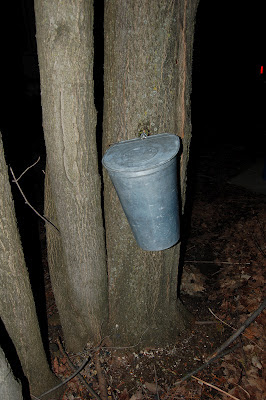 How many maples do you need?
Not that much, as a matter of fact. With the help of tips found on the internet , here's a bit of maths (also take a look at the Ontario link at the end of this text): As soon as a maple tree reaches 25 cm in diameter (10 inches), we can tap it without risk. The more it grows, the more taps it can support, up to 4. So a 62cm or more maple tree (25 inches and more) can give up to 4 taps. If you have enough maple on your yard to total 6 taps, you should be able to produce about 1 gallon of syrup. It's enough to cover the needs of a family for a year. Well of course, it always depends how much of the stuff you eat... I know a couple who consumes 4 gallons per year.
In short, I have at my home 1 venerable sugar maple that still produces (we put only 3 taps on it in respect for its age - over 100 years old) and three others big enough for a tap each. Over all, I have 6 buckets, allowing our harvest to hover around 40 gallons of maple sap, which after boiling will become 1 gallon of beautiful golden syrup.
Don't worry : 40 gallons is not too much to handle, since it's not harvested all at once. Me and my husband work full time and with a little bit of organisation, it's quite manageable, especially since the season lasts only a few weeks.

Simple, basic material for the harvest:
To collect the precious maple sap, you will need spouts - or spiles (those little metal drippers drilled in the tree) and tin buckets, with lids. We bought ours from a sugar house owner, many years ago. But sometimes hardware stores or farm stores stock these too. 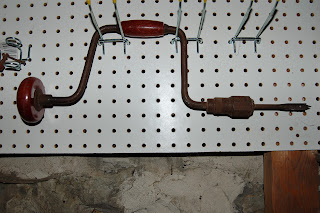 You'll need a hammer and a crankshaft (or a power drill with an extension or even better - a battery operated one). The drill bit needs to be of the same diameter as your spouts. We noticed that taps receiving sunshine give more water, so don't drill on the north face, because you will not harvest much.
The lids are useful to prevent rain water and impurities to fall in the buckets. It's not bulletproof however and you will eventually find dust, pieces of bark, moss and lichen and even drowned insects in your precious liquid. Don't panic! You will just need to filter the liquid before boiling it and all will be well. For this part, you will need a sieve and a clean linen.
Some days the sap flow will be heavy, it is therefore useful to have a big holding container of some kind to store it if you can't boil it right away. The sap can be kept for 24 hours in a chilly place. Longer than that and it will spoil - the taste will be altered and the sap will start to become cloudy. As long as it is still cold outside, you can keep it there, out of the sun. I found that a giant water bottle (those that we place in distributors upside-down) is a perfect receptacle for storing maple sap (do invest in a big funnel, it will save you toil and trouble). A clean bucket can also do the work fine, as any container of  5 or 10 gallons will be good too. If you'd rather, you can definitely just drink the maple sap, it is delicious by itself (watch out however, drinking a considerable quantity may provoke diarrhea in some individuals - Partly evaporated sap can have that effect as well (in French, we call this liquid treat "reduit", which means "reduced". For my part, I'm not affected in either case).
Finally you'll need a big cooking pot and a source of heat to bring your liquid to a boil. A skimmer or a big metal spoon will be very useful too to take out the foam that appears during the process.
If you make your syrup inside and you heat your house with a wood stove, you can simply place the pot on top and let the water evaporate slowly.
It's Lee Reich's method, an american agronomist - his site is very interesting, by the way. Otherwise you will have to spend on electricity or gas to boil all this liquid. On the other end, you will recycle this heat to warm the house and you will humidify it as well, especially if - like me - the inside of your house is very dry. If you don't start the stove's ventilation (in part or during the entire operation), you will keep the moisture inside.

On non-stop days of boiling however, even with the stove's ventilation, the moisture in your house will be noticeable.
I'll give you reassurance right away : your walls won't become sticky (if they are, it's because they were already dirty or greasy, or according to Lee Reich, if you boil your water so hard that it splashes on the walls). The moisture that sticks to walls is clean water from evaporation, just like the one after a long hot shower in the bathroom. Since only the water from the solution evaporates, what's left in the pot is sugar and will make the syrup once it's concentrated enough (i.e. lots of water gone).
Personnally I use this humidity to clean easily all the surfaces of my kitchen. But the rest of the house doesn't benefit from this steam bath, the quantity of vapour not being sufficient.
This year I wanted to try boiling the water outside. For that, I should build a portable rocket stove, but I didn't have the opportunity to get to it yet. Next year, hopefully... There are plans and videos on YouTube showing how to build one with 16 bricks or a couple of tin boxes, for instance. It's a very powerful system that doesn't pollute much and produces an intense heat without smoke. It uses a very little amount of wood.

My boiling method :
My technique could be more sophisticated. I'm sure, for example, that I could use a thermometer, but I started in a time where money was tight, so I learned to do without it. If you want the more precise and scientific method, check the documentation provided by the Ontario Government on the subject (link at the end of the article).
To figure out when all of this as become syrup, my way has nothing scientific about it : I compare the taste to syrup from the previous year, if I still have some, or syrup from the grocery store. Texture is also a clue, but don't forget that boiling syrup doesn't have the same consistency, it will feel way more liquid than the one from the refrigerator!
Note : You can always boil anew a syrup that's too clear, but if you overdo it, you will end up with toffee, that you can spill over fresh, clean snow... if you had the foresight of storing some in the freezer, of course! 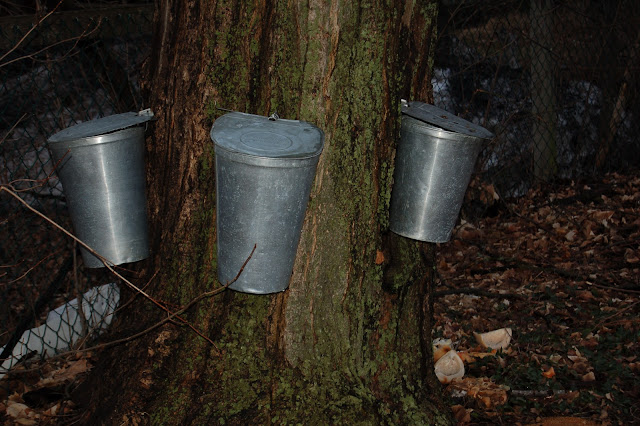 To learn more on maple syrup, it's nutritionnal values and its production, and to browse recipes, check Maple syrup producer's Federation of Quebec.
For a detailed method on how to tap your trees,  utensils, boiling process and preservation of the syrup, check this document from Ontario government on backyard maple syrup production.