May Wine and Bees

Cet article en français.
Este artículo en español.
Hélène:
Welcome to the garden! The garden entryway was definitely at its best when I started writing this article, around the end of May - beginning of June. The meadowsweet (Spireae) was covered in sweet and tiny white flowers. This sight transformed itself lately with the flowering of the goatsbeard (Aruncus dioicus), that looks like ivory fireworks and the vibrant pink of the wild roses.

The month of May offers a strange ritual, well-known in Europe, whose origin is said to be from Germany (althought the French Wikipedia says it comes from Belgium - the english version states it comes from Germany). Maitrank, Maibowle, May wine or boisson de Mai, is traditionnally served on May Day holiday. It is made from steeping sweet woodruff (Galium Odoratum, also known as Asperula Odorata) in a white wine. Some sources recommand a sparkling wine instead, others mention adding orange slices or other fruits - I kept it simple, adding only the plant and some sugar to the wine and letting the mixture steep for 1 month. 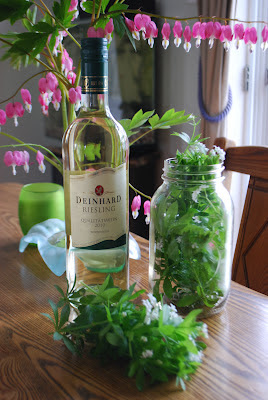 The recipe I had found in this excellent book suggested either a Riesling or a Sylvaner wine, I contacted a good friend who happens to be a sommelier, Christophe, who also has a blog on wine, to ask for his opinion. He suggested this Sylvaner. I also took a Riesling by mistake - this, however, put me in a perfect position to test the difference between both wines.

The results are surprising. The taste of the wine itself is subdued and I could definitely taste the plant in all its strength. The recipe I tried required to had sugar at the beginning of the process and to serve it very chilled. Luckily I followed that last step, else I would have found the wine too sweet, since it's closer in taste to an ice wine. But the bonus of such a chilled wine is that it's definitely perfect for hot summer days!

The bees :
The Juneberry somehow didn't fruit regardless of its multiple flowers. This gave me quite a scare, because it lead me to think that the winter - however mild it has been, in reality - managed to hurt also my powerful garden allies. I am referring to my solitary bees (megachilidae or leafcutters). 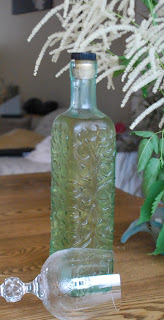 However my ownership of them is untrue. After all, I haven't made a hive for them, I just prevented myself, at a naïve time in my life, from destroying them. After contacting the Montreal Insectarium who offers invaluable expertise on identifying insects, here's the information they gave to enlighten me along with some of my personnal observations on these amazing creatures.

The wood planks that my raised garden beds are made of can accomodate - following my personnal observations - nests for about 20 bees per year, if not more. It is clear to me that these bees do a serious amount of work here in the garden. This year, I had the pleasure of seeing them wake up on May 29th. At this date, I not only saw some of them get out of their individual nests for the first time, I also managed to take picture after picture up close and personnal - and it didn't seem to bother them one bit!

I've taken a beautiful picture (show bellow) : A bee and a hoverfly gathering pollen from chives flowers. The answer of the Insectarium, while confirming the identity on these two individuals, also mentions that the hoverfly is an excellent pollinator as well and that its bee or wasp appearance is a defense mechanism (called Müllerian Mimicry).

When I moved to this house and garden in 2008 and saw the bees, I thought : "How am I going to work the garden, I have a small child that loves to play in there, we will disturb them for sure and they will sting us!" Well nothing. Nada, Nein. We never suffered a single sting and althought we do approach the garden with caution, these bees are not only peaceful and adaptables, but they visibly learned to tolerate us (and vice versa, let's admit it), they accepted us and then... Then. It's hard to explain what's going on exactly, especially since these bees provide new individuals each year (one bee can live only up to a bit more than a year), but it feels like we know and recognize each other and we are somewhat comfortable with each other.


For example, a couple of days ago, while harvesting strawberries, one came very close, enough for me to feel its wings beating on my arm and then it went away (gave me goosebumps too!). Maybe it just wanted to identify me. Last year, while I was hand pollinating my squashes with a paintbrush (related in this article), I cornered one in a flower. I definitely shook it up with my paintbrush and althought it came out of there dizzy , it didn't sting me (you may attribute this to the dizziness). I often work near the bees' nests. During that time, I clearly notice they avoid going in or out until I am gone. We have "an understanding". It isn't signed on paper, but it somehow works. So even if I unfortunately don't have Juneberries this year (and the cause looks like a late night frost), I'm at ease knowing my bees are back again this year and are doing well - extremely well, even. 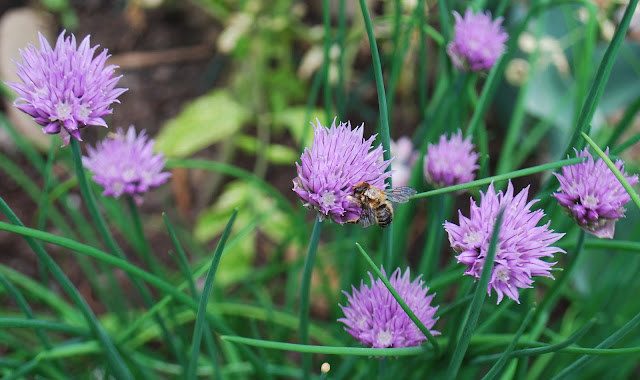