Louise : How to make friends with such a rascal ? 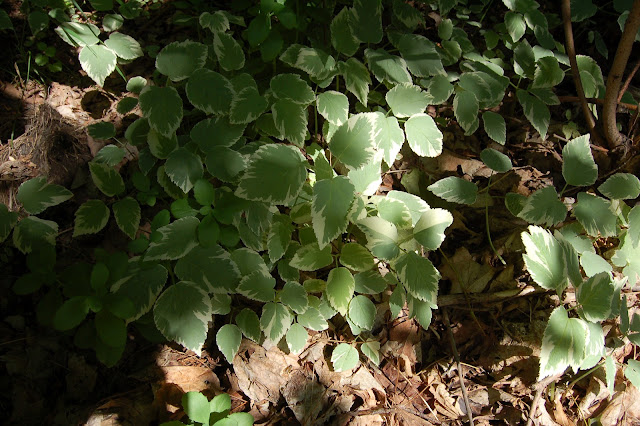 First, one needs to know it better. Let me tell you about my own experience : in my garden, there's a nice looking ground cover perennial presenting a variegated foliage : Ground Elder, or Herb Gerard, Bishop's Weed, Snow-in-the-Mountain, Goutweed (because it was used as a remedy for Gout, a medical condition also called Podagra). In French, it's called podagraire, aegopode, petite angélique, herbe de Saint-Gérard or herbe-aux-goutteux. In latin, it is  Aegopodium podagraria, in Spanish, Aegopodium, Pie de Cabra, Podagraria, Yerba de San Gerardo.

In its wild form, it's plain green and grows in abundance from Europe to Western Asia. It can grow up to 60cm high (2 feet).

In Quebec, I encountered only the variegated form, the one you can find in some garden centers, and which is much shorter (20 to 35cm - 8 to inches high) and... less invasive.

So handsome for a rascal ! 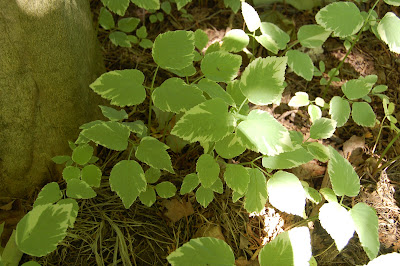 Our variegated Goutweed is appreciated because it makes a dense ground cover that - just like its all green cousin - eliminate competition, spreads vigorously throughout all the space it can get and forms a clump that illuminates its spot. It prefers dappled shade and gets along in any type of soil.
You will tell me : a handsome perennial for shade that can compete with weeds...

Where is the problem in this ?

Well, the problem is that it tolerates no other plant ! It will kill it. Even some bushes, like roses. I suspect that it's responsible for the death of my  Staghorn Sumac. I imagine that it must excrete  something at the root level... Add to this belligerant nature a desire to conquer the world ! I had a garden where it tried and tried to escape throught the lawn using its root system. European sources mention that Goutweed can selfseed. But apparently, it's not a problem in Great Britain. Here, I never noticed that behaviour either.

Some say that you can cultivate Goutweed in pots and it's always possible to cut and remove the bottom of a plastic pot and push it down in the soil in order to make a barrier, so your plant won't escape.

In my actual garden, it was there well before us. Luckily, it has been located at the edge of our lot, under mature trees, bordering a gravel entrance way. I put a thick layer of tree leaves to mulch the edge of its territory and it never escaped.

On my part, knowing that I most probably could not get rid of it, I did not try and left it in place.

Friendly plant ?
It's only recently that I discovered Goutweed's usefulness in the kitchen and as a medicinal plant. Personally, it could as well be named Tasty Weed,so much we find it delicious.

I tried it in cooking only this spring and I was amazed : so good ! I did not take the risk to eat a lot of it at once yet, I used it, for instance, as a sidedish with meat. It's because I'm always careful when introducing something new in our diet. Allergic reactions or simple intolerance are possible, after all.

Moreover, its taste is strong and I wanted this to work. After all, it's a marvelous thing to discover a new perennial vegetable in a garden, but we have to learn to appreciate it if we want to consume it year after year.

So, I tried it first in a potato and egg dish, then in a soup, and finally as a potherb in a veal meal. For those three dishes, we discovered with pleasure that Goutweed gives a different, rich and savoury taste to dishes.

This plant has been used since ages in different ways
It seems that Romans brought it with them as far as Great-Britain and it has been widely used in all of Europe during Middle Ages. Today, it is still used in Scandinavia, Russia and Lithuania, either as a vegetable or as a potherb.

In the kitchen
We can eat the young shoots in springtime, in salads, or cooked, in many different ways, as a sidedish or as an herb in soups, omelets, and meat or potato dishes.

Many Europeans consider it to be one of the best wild greens to eat. Others don't like it at all.

It's supposed to be part of the carrot's family. Both its leaves and stems are edible. Their taste is quite strong, reminiscing of carrot leaves and parsley.

Be cautious, though, since most internet informations on this plant mention that you must harvest it before its bloom time, because after that, its taste changes and the plant becomes laxative. A source gives this trick : in order to prolong the harvest, you just have to cut down the leaves regurlarly in order to prevent the plant from blooming. This way, it's supposed to be edible all summer long. I'll have to try it.

What I did try was to freeze the leaves and I happily discovered that freezing does not alter the taste.
Use in Herbalism
Medically however, it's to be harvested after blooming, and used fresh or dry, at least according to the site Plants for a Future. It's rarely used today, but it does indeed have a long history for its medicinal purpose. It's been used as a poultice for treatment such as burns, wounds, stings, achy articulations and in teas for arthitis and rheumatism. But its reputation comes mostly as a medication for people suffering from gout, hence the name Goutweed. This Wikipedia link will tell you more about this medical condition that can become chronical. It's linked to the metabolism of uric acid and it mostly attacks articulations, kidneys and skin.

What's the lesson in all this ?
First, the knowledge that useless plants don't exist at least from the nature's point of view. Each plant plays a role that Mother Nature provides always. In other words, if a plant appears and prospers somewhere, it means nature found a role for it to play there. This is also true for plants that suddenly take over an ecosystem because it means they generally benefit from an abundance of something that's not readily getting recycled by something else. Most often they are there to heal the damaged habitat and these plants tend to get replaced later on by other plants that get replaced by other plants. It's just a long list of specialist plants that work one after each other to heal the environment. That we see them as weeds is a very human perspective.

On the other side, it means a lot of work for the gardener who doesn't wish a certain plant at a certain place and this can create real problems, I know this from personal experience, probably like most gardeners around the world. But now, before dreaming up a magic wand that will rid my garden of undesirable plants, I will start by researching on it in hopes to discover its hidden virtues.

A couple of recipes for those who are tempted to taste it:

http://cuisinesauvage.blogspot.ca/ : This blog is extraordinnary, albeit in French. Pick "egopode" in the menu and you will find 3 different recipes. I heartily recommend "la galette d'égopode".

http://www.medecinesnaturelles.com/index.php?to=3&so=3&page=7 : Another one in French proposes a soup made from spring greens that are easily available in many gardens.

And to top things off, my own goutweed veal cubes recipe:

1.   Cook the onions and the meat in the oil at high temperature.
2.  Add the broth very slowly to prevent sticking.
3.  Cook for 5 minutes at medium temperature.
4.  Add the goutweed, stir and let cook another 5 minutes.
5.  Add salt and pepper.