Hélène:
After this last weekend (third weekend of October), the garden is finally closed. Multiple frosts brought it down and I lost a good quantity of green tomatoes and basil in the process. I also lost my Rex Begonia, "Snail" cultivar, by laziness because I didn't bring it inside when I clearly should have. That might be the thing I'm most upset about, too, since I liked that plant very much. But the garden was dedicated this year to one very special thing (that I completely harvested before the frost): dried beans.

We eat a lot of legumes here: they are part of our homemade spaghetti sauce and chili, are added to soups from lentil soup to pea soup to white bean soup. We use a lot of refried beans in our mexican dishes and chick peas in our couscous. Logic dictated that eventually our garden would have to turn full force toward growing these. Here's the plant list on the top pic, a couple of weeks after planting the seeds: the white and pink tall flowers is a refined cultivar or wild milkweed, followed by the bluish, big leaves of a hosta. Next to it, there's my first variety of beans called Iroquois Cornbread. With your eagle eyes you may spot behind those a green trellis leaning on the wood fence and on that trellis another bean variety is slowly reaching up, called Painted Lady. The flower of that variety is quite pretty.

The dark green and burgundy leaved bush is a weigela followed by another blue-leaved hosta (between these two, hidden in the very corner of the garden, there are two tires piled up that I used as a squash container. This year, the squash Burgess was grown in it, but it only produced one squash, unfortunately. Right next to the hosta and before the obelisk, another bean can be spotted called Pepa De Zapallo, also called Tiger's Eye; it's a chilean variety that gets harvested really early in the season - earlier than any other I had this year, in fact.
The obelisk had two new varieties climbing on it, one named Flagg that did really, really well and the other with the funny name of GaGa Hut Pinto, also called Seneca Pinto, but that one didn't do so well. I unfortunately wanted to plant in front of the obelisk a new variety called Hopi Black, a bush type bean, but the potatoes took over and annihilated the bean's chances. The potatoes are the immense green mass in front of the obelisk you can see on the top picture. What can I say: it's my eternal flaw, trying to cram to much stuff in so little space and the lesson needs to be hammered on my person some more, apparently.


So what were the successes? 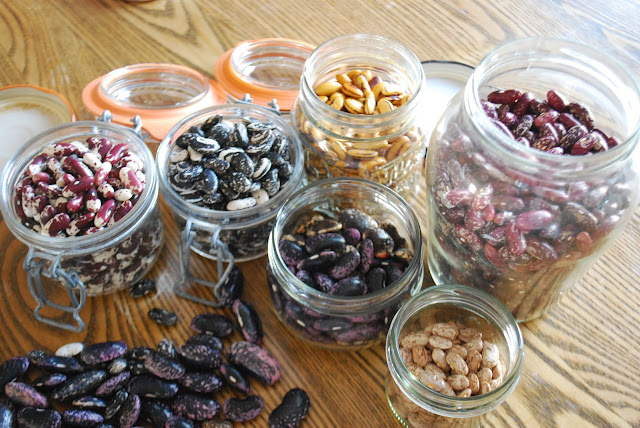 Some beans have given amazing amounts like Iroquois Cornbread (in the picture right above, it's the biggest jar with a burgundy bean stripped with thin cream lines), others in smaller quantity, like GaGa Hut Pinto (smallest jar - just below the biggest - with cream beans spotted with coffee colored marks). 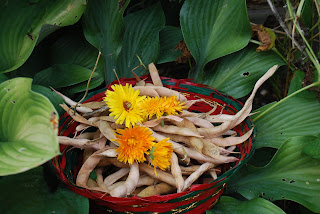 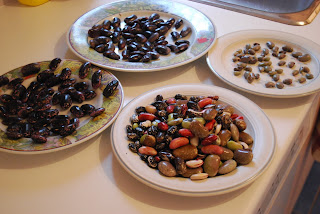 Of all the beans, Iroquois Cornbread have given the most followed by Flagg and Jacob's Cattle. Iroquois Cornbread and Flagg are climbing varieties (even thought Iroquois was mentionned as being a bush bean, it really expanded everywhere and climbed wherever it could). In contrast, my little cows (Jacob's cattle) are a real bush variety, very early to harvest: it was harvested second after Pepa De Zapallo, these are the earliest I've ever seen a bean ready. The Flagg variety are quite late but not as much as Scarlet Runner and Painted Lady. These last two, I had to harvest most fresh, else I would have lost them to the frosts. The picture to the right shows the last beans harvested this year, most of them are Scarlet Runner and Painted Lady. What can I say: the season here is just not long enough to really have them at their optimal, but they are still amongst my favorites! The plate on the right holds the smallest green beans, those that really didn't mature enough. I'll have to freeze them otherwise I'll loose them: they wouldn't dry properly. The bottom-most plate holds many different stages of maturity that I haven't classified yet. The two last plates have Scarlett Runner and Painted Lady that may dry well enough left on the counter. I should note that excluding these two varieties, my other beans have all dried well directly on the plants and you get a better quality of beans when they have the time to do so: left to dry on the counter out of the pod, the quality is diminished. 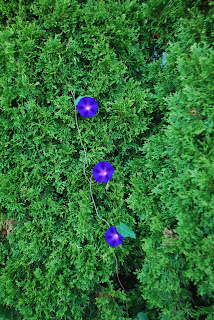 Where did I find all those wonderful varieties, you may ask? From this marvelous canadian producer of many heirlooms. Heritage Harvest Seeds have a section specially dedicated to beans! A dream for me! Comes also from them my giant nasturtiums I planted this year and this beautiful Morning Glory (left picture, variety called Clarke's Heavenly Blue).

Other successes include, as usual, berries. It always start with strawberries of which I have two varieties. The variety pictured on the left lasts 3 to 4 weeks and gives me, at its peak, a bowl like this every 2 days or so. There's also the alpine strawberry that almost tastes like strawberry flavored candy. That one last the duration of the season but does take a breather while the heat waves hit in August. It doesn't give me much strawberries each time, but it lasts, so it can be forgiven. On the heels of the last remnant of strawberries, I can start the harvest on the juneberries and they last about 3 to 4 weeks too. Of course, the quantity of these harvests starts slow, peaks up and decreases during that period. It's visible on the pictures below: the juneberries really pick up while the strawberries are waning. 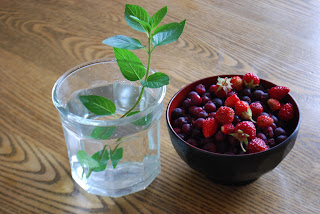 A week later, a nice bowl of juneberries was harvested along with only a handful of strawberries. Following the juneberries, golden raspberries that I'll be able to harvest until the frosts of October - even November on some years. There's a waiting period between the last of the juneberries (the end of June) and the first of the raspberries (middle-end of July). It's also worth mentionning that - like the alpine strawberries - the raspberries take a breather too, around the beginning of September. After that, it's only a handful here and there. When I get berries in such a small quantity, I tend to just eat them right there on the spot, while gardening. But sometimes, I'll take them inside and use them differently. Check out the next pictures: 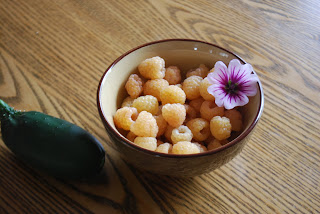 Of course, the raspberries offer at first a good amount of fruits! And this year, even my blueberry plants gave me some fruits: not much but still a lot better than the previous years. Hopefully, next year, they will really step up their game!
Tomatoes produced quite well, all things considered, since they didn't have the prime spots they usually get and like.
I didn't plant my favorite tomato variety and I should have: it makes an amazing amount of fruits compared to the 2 varieties I used this year. My favorite is called white currant but this year, I used old seeds I already had of Pink Vernissage and cherry orange instead of buying new seeds. And since they didn't have any prime location, with the best sun spots, I mostly collected green tomatoes as you can witness below.
Some of you may notice another strange thing: Painted Lady beans are supposed to be orange and brown. Mine come out cream and brown, althought I buy new seed stock each year: seed stock that arrives perfectly orange and brown. But reliably each year, I end up harvesting Painted Lady cream and brown here. Is it because of cross pollination? Or maybe there's a special trace-element in my soil? I have no idea. They are still delicious, regardless.

Failures?
Every garden I know has failures at varying degrees: it's just the reality of the gardener. This year, the peach tree didn't produce. We'll see next year. The cucumbers started well enough, but there was one draught I didn't address. The result was that one half of my cucumbers were half-mature, the other half were small difformed stubs. The broccoli have grown well but somehow tasted awful, so I didn't even bother to harvest them.

After all these years, surprises must be sparse? 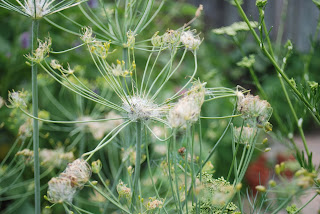 Not at all! Weird surprises, too. I almost placed dill on the failures' list this year, because just as the flowers were going full bloom, (exhibit A, picture above) strange cocoons appeared on the floral heads, warping their stalk and preventing the seeds to develop (the very seeds I want to harvest, after all). And let's say it doesn't look enticing either. But since dill is almost a weed in my garden year after year, I didn't fuss too much about it. I did ask the folks at the Montreal Insectarium however, as I do sometimes. I placed some cocoons in a ziploc bag, in case the experts ask me for them if the pictures weren't enough. While waiting for their answer, one of the cocoon opened up revealing the morphed creature! Want to take a guess at what kind of insect came out of it? 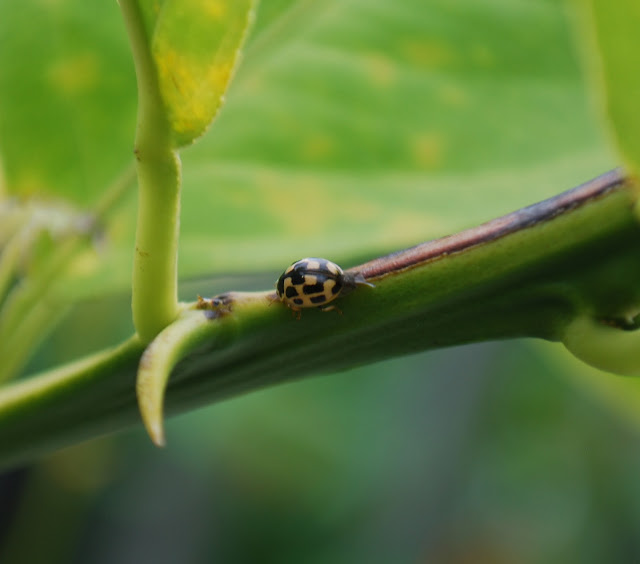 It's Propylea Quatuorcimpunctata,14-spotted ladybird beetle or apparently... P-14. It's a variety that eats aphids and other soft-bodied insects. And despite their cocoons, my dill bounced back and I could do a decent harvest of seeds.
Another funny surprise was the amazing quantity of snails I found everywhere! I noticed them last year of course, but this year, I litterally had to be careful where I was stepping and what I was harvesting! I managed more than once to bring a snail inside while harvesting - for example, basil on one occasion.

As a closing comment, I'd like to come back to the fact that in a world where performance seems to be the only thing worth of measurement, where failure is seen as a personnal flaw, I want to mention that those criteria simply shouldn't be applied to gardening and our work as gardeners. If it was the case, not a lot of us would take time doing it, since gardening, either by our hand or mother Nature will result in some amount of failures. It is perfectly normal in a world that's ever-changing, that's always in evolution. Some plants will wane after a while, to be replaced by plants that wouldn't have managed it at first. It's nothing to take personnally or as a gradation of our success, it's just there to be observed and we have to respect that fact of life. 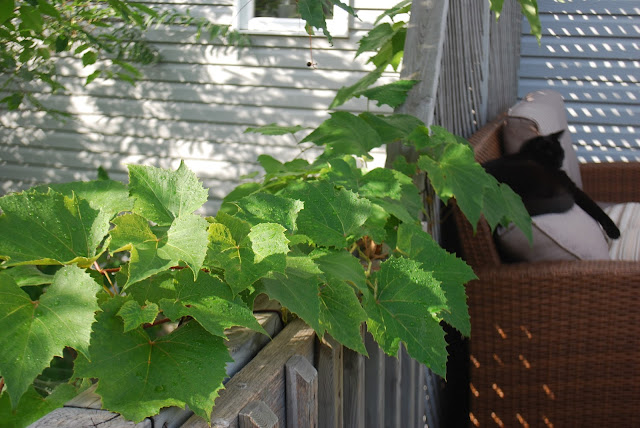