First of, I won't be doing the postmortem article I always do at the end of a gardening season for 2019. Everything's been said in this article and I haven't taken more pictures last year, so I have no material to make one.

We are in Spring 2020 (alright, summer - but I started the article in spring). The pandemic has an interesting effect: with the confinement, there seems to be a lot more people who decided to start a garden. My conclusion is in no way scientific, but my own observation when I tried to order in May from Veseys, the home page was saying that they were filled up in orders and couldn't take any more at that moment since adding to the fact that they had sanitary protocols for their employees and customers, the demand was also higher than usual. While I was writing this article, the situation seems to be back to normal. So I went shopping close to my home and many of the nurseries were out of stocks on some plants.

Didn't matter - I turned my eye on other favorite websites of mine:  Heritage Harvest Seed had a similar message to Veseys ; Solana Seeds was submerged (I managed to order late one night and I'm happy to report the seeds arrived fast at my door); and Richters Herbs had some troubles: a lot of varieties were out of stock and even when I ordered plants at the beginning of May, they arrived the day after I started writing this article, on the 10th of June! On the good side, the service was amazing: they would respond quickly to my emails and look at the beautiful plants I received from them! 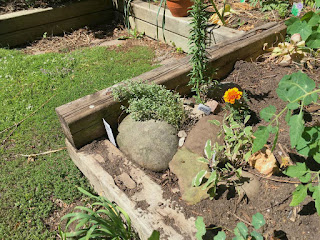 But lets come back to the start of Spring. Firstly, it was a weird spring: here near Montreal, we still had snow at the beginning of May and a heat wave at the end of that same month. Further of from Montreal, there was reports of snow in June! There wasn't really a spring to speak of.

That's a problem since these times are also hard on critters coming out of winter. What can they eat

Weeds and their flowers are a good place to start!  This article from Radio-Canada (sorry, french only!) makes a point about dandelions and how important that plant as become and how much it should be welcomed. Personally, I always loved dandelions. The yellow pompom followed by a funny fluf as always cheered me up. They remind me of childhood. Here's a field of them that's full of life - at least in my eyes!
I also noticed ground ivy (lierre terrestre in french, Glechoma hederacea in latin) also produce beautiful purple flowers that pollinators really relish. I have a lot in my backyard. Louise adds that it a favorite of chickens - adults as well as chicks. 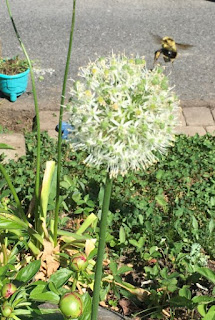 Decorative Onion (on the first picture of this post, with the bubbles) is also a favorite of pollinator, just as shown here with this bumblebee. What I mean in a nutshell is that "weeds" are not necessatily bad. They play an important role even if - to our human eye - we see them as a problem!

I won't elaborate to much on the edible value of weed: First of, I don't have a lot of experience and I am not a fan. Unless famine strikes, I'm not gonna inflict upon myself a dandelion salad or other just for the kick of it.
Of course, there's the fact that these plants tend to be invasive. Since they grow quickly, they will fill any "hole" generally inconveniencing whatever is slower to esptablish. So while the garderner waits for his carrots to sprout, it's a heartache to witness a dandelion sprouts instead on the second day (and they generally don't come one at a time!). Plants taking an opportunity to quickly grow where nothing else does as it's advantages. Look at the picture below: A beautiful violet grew there and hopefully will like the place and come back. Sometimes, the unplanned plant is a joy to have and should be kept! (Comment from Louise: the leaves of the violet are mucilaginous, but can be eaten in spring and early summer - added to a salad, a soup or stew. For the flowers, they're amazing just like that, to nibble on (reminds me of childhood) or also in a salad for color). 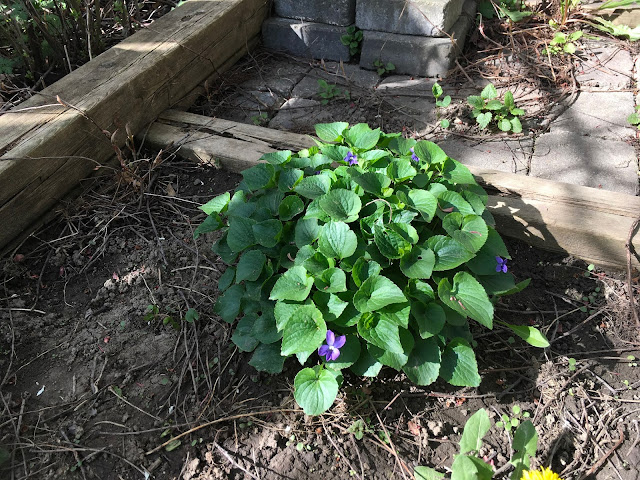