Touching at mid-April, daylily leaves are a treat on the menu!


Yes! You're not having hallucinations and I'm not crazy: We're talking about the daylily's young leaves (Hemerocallis fulva, Hemerocallis spicata), those that sprout out in a close spear and then deploy in a fan. If it's been known for a while that the flowers and even the flowering buds are edible, very few gardeners seem to be aware of the edible value of their spring shoots.
Deer love their taste and now that I eat them myself, I whole-heartedly agree !
First off, what plant are we actually talking about ?
Many mistake the daylily (Hemerocallis) with the lily (Lilium) but also with the iris (Iris). Those 2 last plants are toxic to a point. All 3 are perrenials, are a rather common sight in North America's gardens, and do have an exotic look.
Stay prudent and make sure you are 100% sure on the identification of each plant before eating it (consult with someone you trust - a professional for instance - or a good book on plant identification).
Even more, make sure the site you are about to harvest from isn't polluted or otherwise contaminated.
Even if you know the plant, for the first time you eat it, it is still recommended that you take only a small quantity to make sure your body reacts well (an allergy or intolerance is still possible). By the way, in general, a raw plant is more likely to cause someone an adverse reaction than a cooked one.
Some sources mention that the daylily's leaves can provoke a "digestive system's distress" (read here diarrhea) in one in fifty people. Personnally, I also think that our body needs adaptation to pretty much anything new, especially if the plant in question is vigorous enough to grow out-of-the-garden, surviving in the less likely places and even reproducing there (like roadside ditches). These plants tend to be more nutritious than a tamed garden vegetable that doesn't have to fend for itself in the wild and so these strong plants are more likely to give our civilized stomaches some trouble.
There's a description of the daylily, lily and iris at the end of this article, to help you identify each if need be.


An easy harvest :
I'm not touching my spring-flowering varieties of daylilies (those that flower in May or June), because it could postpone their flowering, but also because those spring species are not the exact same as H. Fulva. I haven't found so far documentation saying you could eat those. So instead, I focus on the hybrids that bloom in full summer.
I harvest all the shoots of a given plant, in one shot with a good pair of scissors, but only once a year and then, I leave the plant alone to regrow its leaves, and don't touch them for the rest of the gardening season.
Later in summer, I will return to harvest the buds and/or the flowers, as many as I want to eat. Collecting flowers is harmless for the plant and since the daylily flower lasts only a day (much more rarely two, depending on the cultivar), it's not such a big deal to take flowers that won't be there the next day, anyway.
To get back on the leaves' case, I do need to wash them thoroughly. You see, my yard lies under a thick canopy of trees and therefore, vegetal debris tend to get stuck between the leaves. At least, the deep layer of mulch made by the falling leaves of the trees in automn prevents dirt from getting in as well. Half of the cleaning problem solved. Anyway, once dirty, this green takes long to clean up, because of the need to check the inside of each leave.
Next they are ready to eat, raw or cooked.
I prefer them cooked. It gives them a delicate taste of green beans and their texture is similar to the tender green parts of leeks. Steam cooking will conserve most of their nutritious value, of course. 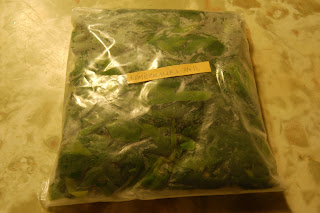 This year, I managed to harvest 1 to 5 pounds of fresh leaves everyday, every time a plant was about completely out of the ground and gained a respectable height  (around 8 inches - 20cm). Generally, we eat part of the day's crop right away with the next meal, raw or cooked, and I blanch the rest (a minute on the stove in boiling water, or  40-60 seconds in the microwave oven at max power, in a small StarFrit silicone steamer, withour adding any water). Next I quickly plunge them in cold water to stop the cooking process and I wring them in a clean cloth to remove excess water). Finally I place them in a recycled plastic bag (I reuse my old milk bags this way), I close the bag with a bit of scotch tape, and insert it in a second bag - to prevent freezer burn. Weigh, identify, freeze et voilà! Next time I need some, it's right there for the taking.
This year, I expect to harvest about 30 pounds of leaves (at the beginning of May I already had 16 pounds in the freezer, without accounting what we ate fresh).
Last year, the harvest was small in part  because I feared I might damage my plants. But they recovered so fast and took such a beautiful appearance, I realize this fear was unfounded - their flowering wasn't even delayed.
Therefore, this year, I harvested  the totality of the shoots once on each plant, so we'll see if it has any indesirable effect on the plants. But I'm not really worried. After all, a hard frost could easily kill the young leaves and it wouldn't affect a healthy plant.
To the table!
We were saying : What is this plant again?
Daylillies come in many colors, but blue doesn't exist in its palette (it's actually the case of many plants). The shape of the flower itself is also variable.
Typically the daylily flower is widely opened and presents 3 petals and 3 sepals. There's also some flowers that boast double (or more) the normal sets (apparently these varieties are less odorous and so in result have more trouble attracting pollinators). Each flower lasts a day - this is from where the name comes from - but some cultivars or species can push this to 2 days before the bloom wilts and is eventually replaced by another elsewhere on the stem. The flowering period depends on the cultivar but some last only 2 to 3 weeks while others, like the popular golden Stella de Oro, are in bloom almost all summer.

The french site Les beaux jardins offers a nice rendering of what the plant and its root system looks like.  The plant's leaves do look like giant blades of grass, grouped in a rather undisciplined fan, definitely less than the very straight fan of the iris. To get ready for the flowering period, the plant produces several stalks of varying height (depending on the cultivar) and these stalks are almost or entirely leafless and sprout from the center of each fan of leaves. At the end of each stalk, small branches will form and on each small ramification, a bud will appear. When ripe and ready to open, the flower looks somewhat like that of the lily (most likely the source of the confusion) but this flower will only last the day (or two). On the other hand, Lily and Iris flowers will last many days before wilting.


The iris (Iris) are, depending on the species, a plant with a rhizome (a kind of plump root lying on the surface of the earth, horizontally). Garden Irises have this feature while Holland Irises have bulbs (the onion looking tuber). The plants form leaves that shoot straight up, have a very thin lance (or sword) shape and looks exotic. When the flowers appear however, there's no more confusion possible. These flowers form along an almost leafless stalk in a zigzag pattern, on one side of the stalk then the next. The stalk may have many branches.
The leaves are rougher, straighter and thicker than the daylily's. They often sport a bluish hue, sometimes with streaks of white.

The iris is much likely the model for our national lily, the symbol we can find on the Quebec flag. Check Larry Hodgson's article on the subject (it's in French, sorry!). Iris versicolor, a species that grows in Québec, is our national emblem.
The Lily (Lilium) is a plant growing from a bulb, like tulips, and so the underground part looks like an onion covered in scales, from where the stalk will sprout. Check the drawing in this article (text in French, but drawing very informative). Leaves grow all around and up the flower stalk, they look like short arrowheads, generally they are all the same length and this gives the plant a columnal look. On top of this stalk, the buds will form, elongating until they open up in a trumpet-like flower that will last many days and of which the hue can vary greatly from one cultivar to the next. Again however, true blue doesn't exist for the lillies. Unfortunately, I don't have any pictures of them, I removed most of them from my garden because of a cute, hard-to-get-ride-of red insect, the scarlett lily beetle named so for its unrelentless culinary love of the plant's leaves.

When you're done with the daylily spring shoots harvest and start on the flowers, remember one thing. Dark-hued flowers are supposedly less tasty (some say the taste is reminescent of iron) than the fairer ones that are sweeter in taste. It is also my experience that the dark reds aren't as good as the yellow or pink ones!

Louise :
It's possible to eat wilted flowers (collect them at the end of the day, when they are closing up, or the next morning). They can be part of a stew, a stir-fry a spaguetti sauce, an omelet or a soup. Bon appétit!
Publié par Dames 3Jardins à 20:58